The Golden Spork is a hidden melee wonder weapon in the Zombies map Mob of the Dead and Blood of the Dead. It is the second most powerful melee weapon in the entirety of Zombies behind the upgraded One Inch Punch, as it can kill a zombie with a single melee attack until round 34.

In order to obtain it, the player must do a series of tasks.

Requirements in Mob of the Dead

Find the jail cell with a blue and green movie poster named "Escape from the Tomb" hanging on the wall near the Warden's Office. Throwing the Hell's Retriever at the poster will remove it, revealing a hole in the wall.

Enter Afterlife Mode. There is a portal entrance at the end of the row of cells near the Warden's Office. Enter the portal and zap a spoon lying on the floor to the right of a large crack with a skull in it. When performed correctly, the player will hear the Demonic Announcer laugh.

Enter the cafeteria and proceed to the barrier at the back of the room. There is a table against the left wall inside the barrier, and the spoon will now be lying on top if it. In order to pick up the spoon, the player will need to throw the Hell's Retriever at it. If done correctly, the player will hear Brutus. (This step must be completed for each player who wishes to obtain the Golden Spork.)

Between this and the next step, the player is given a silver spoon as a melee weapon. This spoon is roughly as strong as Galvaknuckles.

Enter the infirmary and locate the lone bathtub filled with blood opposite a Mystery Box spawn. Hold the action button when next to the bathtub. A silver spoon will appear and stir the blood. (This step must be completed for each player who wishes to obtain the Golden Spork.)

Enter the underground showers and kill zombies using the Acid Gat or Vitriolic Withering. When the correct amount of zombies have been killed (about 50-70 kills), the Demonic Announcer's laugh will be heard once again.

If a player bleeds out and respawns after obtaining the Golden Spork, they must re-complete steps 3 and 4. The Golden Spork will again rise into the zombified hand, and the player can retake it.

Requirements in Blood of the Dead

Within the Warden's Office, there are three pillars which whilst viewed through the Spectral Shield's aim, have three randomized numbers on them. The pillar closest to the Tonic Perk-a-Cola machine being the start of the sequence.

At the bottom of the Citadel Tunnels, There is a set of Voltmeters with oversized Nixie tubes attached to them, locked behind a padlocked grate. Blasting them with a spirit blast from the Spectral Shield will turn them on, setting them to 000. Interact with them to change the number. Input the numbers seen in the Warden's Office. If done correctly, The nearby lift will drop down. If done incorrectly, the nixie tubes will turn off and require another spirit blast.

At the docks, a non-destroyed voltmeter by one of the Mystery Box locations can be activated to cause the nearby crane to fish something out of the sea, if the prior steps are done correctly, the skeleton that was in the lift in the Citadel Tunnels is fished out. Throw the Hell's Retriever at his arm to sever it and the Spoon can now be picked up from his arm. If the steps were done incorrectly or the voltmeter at the docks was activated prior to the steps being done, a broken piece of the Mule Kick Perk-a-Cola machine is fished up.

Place the Spoon in the empty bathtub in the Infirmary, near the KN-57 wallbuy. Retrieve a Blundergat and upgrade it to the Acidgat or Magmagat. Getting kills on the Roof with these weapons will cause blood to drip from the ceiling into the bathtub. After enough kills have been obtained, blood will stop dripping from the ceiling and the bathtub will be full of blood. Interact with the bathtub and drain the blood.

Return to the Catwalk section of the map, there is a large watertower slightly outside the map. Shoot the cardboard supports off of the watertower’s legs. After knocking off all of the supports, a character quote will play and the tower will collapse. The Golden Spork will now be resting on the concrete below the tower.

Go to the middle of the Catwalk, there will be an opening that allows you to see the base of the watertower. Throw the Hell’s Retriever at the base of the tower, and it will pick up the Golden Spork. A character quote and animation will play, and the Spork will be automatically equipped as your melee weapon. 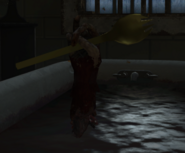 The Golden Spork in the bloody bathtub.

Using the Silver Spoon during step 3. 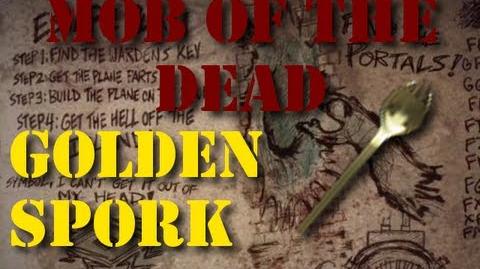 Zombies Tips and Tricks Golden Spork
How to obtain the Golden Spork.
Community content is available under CC-BY-SA unless otherwise noted.
Advertisement