Goldrush is a map in the Nemesis DLC for Call of Duty: Ghosts that takes place in an active abandoned gold mine.

"Navigate through an active minecart system and a central elevating platform in this abandoned gold mine. Complete a Field Order to unleash a pack of wolves on your enemies."
— Official Description

The map is mostly close-medium range. Submachine guns and shotguns will do well because of this, as will some assault rifles. Long range weapons, however, will not do so well, as there is nowhere to use them.

It is very action packed due to the active movement of the environmental dynamic features as well as objective based gamemodes, mostly Domination. Hopping into the minecarts will provide either protection, quick location travel advantage or overwatching the map observing the terrain for any enemies. If maneuvering the map on foot, it is probably advisable to avoid the railway tracks as the minecarts can kill anyone when it hits. The majority of combat happens outside the cave area where there are multiple ways to attack. If one is inside the cave, they can either run to an available staircase that leads outside and to the mobile platform, run outside or hop on the carts. In terms of verticality, it's mostly up and down like going up a slope or stairs and hopping down platforms or rock formations. Some buildings can be accessed, such as the minecart tower, but not a lot of activity takes place there.

In Domination, the A Flag is underneath a railway platform protected by metallic sheets from the sides (which these can be shoot through) located next to a cave entrance, wooden tower and shed. The B Flag is on the moving mobile platform. Going prone next to little coverage is probably the safest way to capture it, however, players will be defenseless once the platform lowers down where enemies can shoot from above. The C Flag is located next to the railway behind a shed and in front of a boarded cave. No coverage is within the area so going prone down could be good.

Go to the south mine shaft, move towards the edge of the ground and look east into a cavern in the back wall; the Egg is hanging on the left part of the cavern.

Arial view of the map

The cave systems with carts

B domination flag which moves between the over and underground 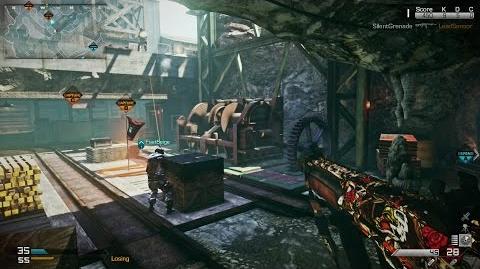 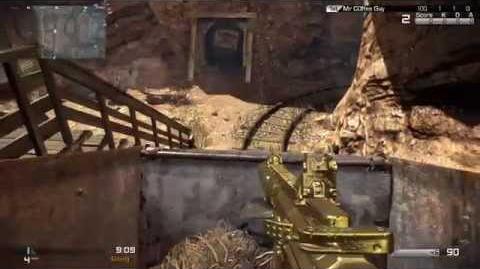