For the train used in Shadows of Evil to move across districts, see Tram.

"Ahh, just what we needed! Not a moment too soon."
— Albert "Weasel" Arlington, when using the Gondola.

In Mob of the Dead, transports a player to and from the Cell Block and Dock, and costs 750 points. To use it for the first time, it must be activated via shock from Afterlife. Unlike similar utilities of transportation, such as the Lunar Lander or the Mine Cart, zombies close to the Gondola are not forcefully ejected or rendered immobile when it is activated. It is possible for zombies, and even Brutus, to move in before the doors close and attack the players. Players can use the gondola to obtain a skull using the Hell's Retriever for the main Easter egg Pop Goes The Weasel and the free Blundergat Easter Egg. The skull is located on a lamp below the Gondola's path. However, there is a trick to avoid the Gondola ride by getting close enough to the lamp from the the Juggernog area.

The Gondola in Mob of the Dead.
Add a photo to this gallery

"Whoever designed infernal machine should be shot!"
— Nikolai, When missing a fuse for the Gondola.

In Der Eisendrache, two appear in the starting room and the one to the right can be called via a Tram Fuse. When it is called, it will either have a random power-up or a weapon inside, as well as a zombie at times, and stays until there are no players remaining in it, then leaves. It is even possible to get a Ray Gun in the Tram, although it is very rare.

The tram to the left can be called as well. Upon spawning on the map, immediately throw grenades into the tram. Throughout the game, acquire and use Tram Fuses. Upon using the fifth fuse, the left tram will be called to the station instead of the right tram. Drops can include Monkey Bombs and Pack-a-Punched weapons. 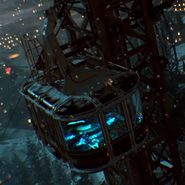 The Gondola in Der Eisendrache

Retrieved from "https://callofduty.fandom.com/wiki/Gondola?oldid=2557685"
Community content is available under CC-BY-SA unless otherwise noted.