For the character in Call of Duty: World at War, see Grant.

Private Grant was a U.S. Army soldier who appeared in the campaign level "Scorched Earth".

He assisted Team Metal with the rescue of Alena Vorshevsky and was injured during the collapse of a huge building, but he managed to survive along with Team Metal and another US Army soldier, Kelly. After Team Metal moved up to continue the mission, Grant and Kelly stayed in the ruins of the building. The fate of both Grant and Kelly is unknown. 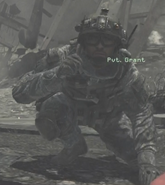 Grant after the building collapsed.