The Gravity Vortex Gun is available as a payload for Stryker and is unlocked at level 31.

The weapon's gravitational pull is far stronger than that of the Black Hole Projector, and is the perfect weapon for taking out large groups of enemies. Objective based gamemodes such as Domination or Hardpoint are the perfect way to take advantage of the power of the weapon, as that is where enemies are most likely to be surrounded by each other. It is advised to be careful with your shots, as you only have two shots to use every activation, so be cautious on when and where you decide to activate it. Not only that, players must be aware of any objects that may get in the way of their shots as they may cause the shot to detonate prematurely.

The Gravity Vortex Gun cooldown was originally 310 seconds, but was reduced to 290 seconds on the February 3rd, 2017 update. [1]

The Gravity Vortex Gun is obtained by activating the Black Hole Fun Fate Card. It works almost like the Gravity Hole Grenade, dragging zombies and killing them. It seems to deal infinite damage and it is best used at later stages of a game since it has an absurd clearing potential, slaying several zombies in a quick time frame as well as a defensive weapon, leaving holes protecting you from getting hit. 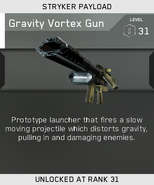 The Gravity Vortex Gun being unlocked in multiplayer.

Concept of the gun.

"Launcher that fires vortex projectiles that distort gravity. When the vortex disppears, it causes explosive damage to everything in its path."
— Description

The Gravity Vortex Gun returns in Call of Duty: Mobile as an Operator Skill. It was added as part of the Season 1: New Order update.