"The compact size of the M3A1 makes it an ideal fit for use inside a tank. With its relatively low rate of fire, this weapon is easier to control than most submachine guns."
— Manual description

The M3A1 Grease Gun appears in one mission only, in the mission the player takes control of Sgt. Sam Rivers in an American Sherman Tank. While on foot the player receives an M3. The Grease Gun has a slightly larger sight than the Call of Duty 2 model and has a faster rate of fire. However it lacks in power, but overall a good choice of weaponry for the mission. 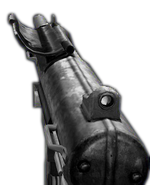 The Grease Gun in first-person view

The Grease Gun in third-person view

The M3A1 Grease Gun is the same as the Thompson from Call of Duty with a few differences. It has a 32-round magazine, very manageable recoil, good damage, and good accuracy. However, it has a very low rate of fire, making it harder to effectively use it in close quarters engagements. Its iron sights are also very small (just a tiny triangle-shaped pin at the gun's front), making it difficult to get accurate shots. Nonetheless, it is a solid weapon which users of the Call of Duty Thompson might prefer over the Call of Duty 2 Thompson, or for those looking for a change. 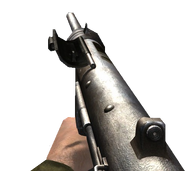 The Grease Gun in first-person view. 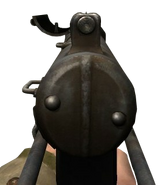 The Grease Gun in third-person view.

The M3 grease gun was probably cut very early in the games or is a left over from prototype, since the only trace of it are accuracy files for AI characters.

The Grease Gun returns in Call of Duty: WWII.

Of all the SMGs, the Grease Gun has the slowest time-to-kill in close quarters, scoring three to four-shot-kills at close range depending upon where the bullets hit the enemy. The rate of fire is also very low, making the Grease Gun a very accuracy-dependent weapon. Missing a shot with this weapon can increase the time-to-kill severely as a result of the lower rate of fire, and even if the player lands every shot, the weapon faces severe competition from the other Sub-Machine guns, many of which can kill faster than it, as well as many of the assault rifles, almost all of which have faster times-to-kill at point blank.

Although the weapon does boast fairly controllable recoil, it is still outclassed at medium range by the Type 100, which boasts a faster time-to-kill at range as a result of higher damage, along with cleaner iron sights and better handling. Assault rifles such as the M1941 and STG-44 also take less time to kill at medium range, and even an M1 Garand can effectively suppress a Grease Gun user with sufficient accuracy. At close range, the PPSh-41, Type 100, and all three aforementioned assault rifles all kill faster than the Grease Gun. As well, many players simply skip using the Grease Gun altogether in favor of the much more effective PPSh-41, which (as of the beta) is available from Level 1 with the use of an Unlock Token. It's sight-in speed is slower than most SMGs which can be alleviated by the Quickdraw Handle. A mixture of the Grip, Rapid Fire and an optic of players choice can help alleviate some of the weapons issues. Advanced Rifling also has little effect on the range.

Prior to a patch, when the player equips a Reflex Sight on the Grease Gun and changes the reticle, the default reticle and the new reticle were both displayed on the optic. It shared this trait with the GPMG.

The Grease Gun is available in Weapon Lockers within all maps, excluding Prologue, from the Mystery Box in all maps for 1,000 Jolts and from the Submachine gun Waffenboxes in The Tortured Path for 2,000 Jolts. When upgraded either by the Ubersprengen or via the Freefire perk "MK. II" it becomes the The Greaser gaining an increased magazine size increased maximum reserve ammo and increased increased damage.

The Grease Gun in first person.

Inspecting a side of the Grease Gun.

Inspecting another side of the Grease Gun. 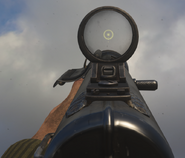 The reticle glitch shown with the Default and Drop Down reticles