Green Run is a Zombies map that is featured in Call of Duty: Black Ops II, and the twelfth Zombies map overall. Primarily, it is the map in which TranZit is a playable game mode that connects all the Survival maps and other areas consisting of the zombie maps set in Green Run into one large "campaign" mode, with an optional objective to complete. The map is split into five locations: Bus Depot, Diner, Farm, Power Plant, and Town, four of which are playable as separate maps in the Survival, Grief or Turned mode maps. The Power Plant can only be accessed in TranZit mode. The events in the map are set after the events of Richtofen's Grand Scheme from the previous zombie map in Call of Duty: Black Ops, Moon.

It is also playable in a mission-based fashion within Call of Duty: Mobile.[1]

The Green Run map itself is split into certain locations which are listed below, however the bus only stops at five of them in TranZit mode. Between the Bus Depot and the Diner there is a small tunnel which is accessible via the Bus or on foot. Also in the corn field, you can access the pylon through another corn field while meandering through a set of mazes. The final hidden stop is the Hunter's Cabin between the Power Plant and Town, inside the cabin is the Bowie Knife and a craftable item for the Thrustodyne Aeronautics Model 23 (commonly referred to as the Jet Gun).

Zombie Shield, the equivalent of an Assault Shield.

Zombies outside the Diner. 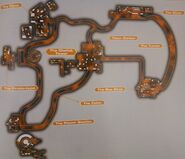 An overview of TranZit.