Grid is a medium-sized multiplayer map featured in Call of Duty: Black Ops.

Grid is made up of a series of small buildings, hangars, and generators across a snowy landscape, with a power/comms grid at one end. This map is supposed to resemble a secret Soviet communications facility, similar to the Duga-1 array near Chernobyl. On the East side of the map, a large area with lots of snowy foliage are ideal spots for snipers, especially the ones with Ghost.

There are two known ventilation shafts made specifically for the RC-XD, one located in a pipe outside in the trees area to the East, and one in another building in the North to North-East area.

Most of the fighting on this map tends to gravitate towards the truck in the center of the map and the two buildings on either side, especially on gametypes such as Domination, Demolition and Search and Destroy, where at least two objectives are in close proximity of either building at any time. As a result, the Black Ops spawn is an excellent choice for calling in Killstreak rewards, as there is more cover and fighting only occasionally occurs in the corners.

In other gametypes, such as Team Deathmatch, this map is often quiet, and is usually open to more stealthy gameplay than that of other maps. There are many flanking routes and plenty of cover in between choke points. Capture the Flag matches usually end in overtime. This is because one of the flag spots is out in the open, offering little in the way of tactical flag running, and both teams will most likely win a round.

If the player is spectating or is in "Free Camera" in Theater mode, they can go above the map and spot mountains surrounding the map close by to the North, South, and East. The mountains to the West are in the distance and the sun can be seen just setting over them, indicating that the time of day in the map is early evening. 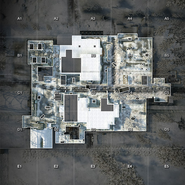 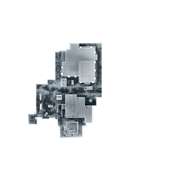