For the character in Black Ops III, see Griffin.

"Sod off! We're still in one piece."
— Griffen answering to Wallcroft after closely evading a train during "Mind the Gap."

Griffen participated in the raiding of the cargo ship on "Crew Expendable". Fighting alongside the full squad for the first few minutes of the mission, he was then assigned by Captain Price to guard the rear of the unit with Wallcroft while the rest of the unit breached the cargo hold. He and Wallcroft boarded the helicopter, before they spotted some incoming MiGs which subsequently opened fire on the ship. He survived the events of "Crew Expendable".

Griffen took part in the SAS operation to prevent the transport of an unknown cargo across London. When their targets escaped into the London Underground he, Burns, and Wallcroft pursued the train. During the chase, Griffen drives one of the trucks and helps pursue the train. He is wounded, releases control of the wheel, and collides with the train, probably crushing him. If that didn't kill him, the truck slams into a support beam, ensuring his death. Although Burns and Wallcroft survived the impact, Griffen is killed along with the rest of the SAS team. His body can be seen near the truck.

Wallcroft and Griffen in Call of Duty 4: Modern Warfare. 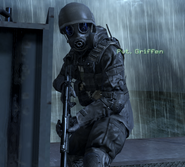 Griffen during the mission "Crew Expendable".

Griffen and Wallcroft in "Mind the Gap".