Special Agent Grigori Weaver (Russian: Григорий Уивер) was one of the secondary character and a non-playable character in Call of Duty: Black Ops. He is a member of the CIA Special Activities Division and part of the squad in the mission "WMD". The callsign for his squad during "WMD" is Kilo One.

He also appears in the mission "Numbers" alongside Jason Hudson as one of the two who interrogate Dr. Daniel Clarke. He loses his left eye during "Executive Order" after Lev Kravchenko gouges it out with a knife, and wears an eyepatch throughout the remainder of the campaign. Later, it is revealed that he and Hudson are the ones who were interrogating Alex Mason.

Weaver makes an appearance in Call of Duty: Black Ops 4 as a character in the Blackout mode during Operation Dark Divide.

According to Weaver's CIA dossier, he was born in the Union of Soviet Socialist Republics on November 10, 1936. His father was a local political figure who was killed during Stalin's Great Purge and his mother defected with her children to the U.S. during World War II.

In 1954, Weaver enlisted in the United States Army, where he excelled in Ranger school before being recruited into the CIA for his Russian language.[2]

Weaver was assigned to infiltrate Dragovich's launch facility and disable the rocket that is set to launch at the Baikonur Cosmodrome in the USSR. However, before he could do that he was compromised and captured by Dragovich's second in command, Kravchenko. Later Woods and Mason spotted him via a pair of binoculars. He was tied to a chair and interrogated near a Mi-8. Kravchenko then called Woods on the radio and told them that he would be spared only if they surrendered.

Shortly before reaching exfil, a slippery roof causes Clarke to fall and hang from Hudson's arm. Before he can reveal important information about Nova 6, Clarke is shot through the head. Weaver and Hudson continue on and are eventually rescued by other CIA agents. They immediately head to the Soviet Union to retrieve Steiner.

After the attack on the Rusalka and Dragovich's death, Weaver declares victory, to which Mason responds, "For now..."

Perhaps our intel was off!
The following text contains information that only appears in Intel from Call of Duty: Black Ops.
Therefore, the canon status of this information is unknown.

On October 18, 1978, The CIA formed a joint task force with MI-6 in order to find and kill Mason, Hudson and Weaver in what they dubbed Operation Charybdis. The kill order, however, was eventually rescinded, and the trio were spared, as they continue to work with the CIA.

In 1979, Weaver was deployed to Iran during the Iranian Revolution, where he first met BND agent Samantha Maxis after suffering from serious wounds. During this mission, Weaver accidentally caused the death of a young boy, who he thought was supposed to be with his mother; instead the boy was inside a house which he burnt down. Later, despite not being part of the mission, Weaver helped to extract Maxis out of the country, and the two began to form a strong bond.

In 1983, Weaver was soon contacted once again by Maxis, who sent a video tape regarding a zombie outbreak at the abandoned "Projekt Endstation" facility in Poland. In response, a secret task force named Requiem was created to deal with undead activities around the world. Weaver is assigned as the task force's Field Ops Director, as he oversees his own strike team, while working with other department heads: Major Mackenzie Carver, head of Containment and Security; Doctor Elizabeth Grey, head of Unnatural Sciences; and Doctor Oskar Strauss, head of Energy Research. He soon after led Requiem's global anomalous outbreak response while also sending his strike team into the Projekt Endstation facility to investigate what happened when the Omega Group entered the facility. With his guidance and some outside help, Requiem was able to close the rift opened at the Projekt Endstation facility, resulting in the destruction of the entire facility altogether.

On June 15th, 1984, Weaver would command a strike team sent to Omega Outpost 25, with the goal of rescuing Samantha Maxis. He would assist the strike team in both rescuing Maxis, as well as defeating an Elder God before the strike team was able to exfiltrate.

Sometime after Requiem's mission at Vietnam, Weaver would lead Operation Threshold in the Ural Mountains, sending a strike team to complete various objectives that would help Requiem gain a technological advantage over the Omega Group. During this time, Weaver also takes time to visit Maxis, who is kept under isolation due to her time spent in the Dark Aether dimension. Feeling that she needs a companion, Weaver decided to acquire a female Rottweiler to keep her company.

Following the strike team's secret mission to avert Operatsiya Inversiya in November 1984, Weaver confronted Maxis for keeping secrets from him and involving Dr. Grey in her plan. Later, Weaver alongside two other agents would apprehend Maxis in her room and take her away for "additional testing" under the Director's order.

Some times later, Sergei Ravenov contacts Weaver through Maxis' secret radio channel, requesting Requiem's help in extracting the "Omega Eight", a group of Omega scientists who wish to defect following the failure of Operatsiya Inversiya. Despite being angry at his and Maxis' actions and secrecy, he agrees to help carry out the operation. However, the mission turned out a total failure, as it was a trap set up by Kravchenko and Dr. Hugo Jager to eliminate the defectors and capture the strike team.

Some times later, news breaks of an outbreak occurring in East Berlin. Weaver, however, was disallowed from taking action by the Director, who wishes to take matters into his own hands. However, he was able to help extract the strike team after they finish following Kravchenko's order, by asking Maxis to conjure a portal for the team to return to Requiem headquarters. 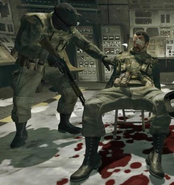 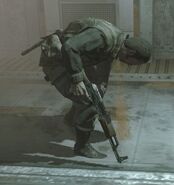 Weaver revealed as one of Mason's interrogators in "Revelations".

Weaver, as seen in the Zombies teaser on Multiplayer reveal trailer.

Weaver stares in shock at the footage of Projekt Endstation.

Weaver asks Sam to turn herself in, noting the CIA can protect her. 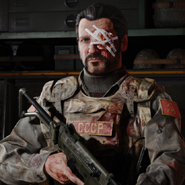 Weaver as an operator in Multiplayer.

Weaver watches as Samantha struggles to keep the portal from Berlin open.

As Samantha nearly collapses due to exhaustion, Weaver (as well as Samantha's pet dog) comfort her.

Weaver thanks Sam for stopping the Forsaken.

Weaver willingly allows himself to be arrested by the military police.

Weaver with the Disciple of Mayhem skin in-game.