Call of Duty Wiki
Register
Don't have an account?
Sign In
Advertisement
in: Call of Duty: Black Ops Specials

The M202 Flash "Grim Reaper" [1] is a multi-shot rocket launcher that appears in Call of Duty: Black Ops. It is able to fire up to four rockets in one load.

The Grim Reaper only appears in the missions "Numbers" and "Victor Charlie", but it is also used by Frank Woods and Joseph Bowman in "Crash Site".

In the campaign only, it is possible for the player to fire multiple rockets at once, by simply entering ADS and pressing the hold breath button. A number next to the sight will rotate, indicating how many rockets will be fired.

The Grim Reaper can only be obtained from a Care Package (five kill streak, four with Hardline).

The Grim Reaper can either lock onto killstreaks or be free-fired.

The Grim Reaper is extremely powerful on a per-rocket basis. Each explosion has an explosive radius of 6.4 meters. Unlike other rocket launchers, the Grim Reaper has absolutely no damage drop-off in the explosive radius, dealing 150 damage throughout the entire area of the explosion. This is a great bonus that the Grim Reaper has, as it means that players do not need to be precise to kill opponents. The high damage per rocket works the other way, though, as the player will instantly die if caught in a rocket's explosion, and as such, users need Flak Jacket to stop an accidental blowing up. So long as the enemy is not using Flak Jacket, any player caught in the blast radius of a Grim Reaper rocket will die. Direct hits will deal 500 damage, killing a Flak Jacket user.

The Grim Reaper, as expected, has some of the worst handling characteristics in the game. Users move at a lethargic 80% of the base speed, and strafe at a mere 40% of the base speed. The Grim Reaper cannot be hip-fired, and trying to do so will instead raise the sights to fire a shot. Aiming down the sight is a painful endeavour, taking 500 milliseconds to perform. The Grim Reaper has one of the longest reload times in the game as well, taking 6.85 seconds to perform a reload. Thankfully, a Reload Cancel can be performed at 4.25 seconds. This is easily one of the worst reload speeds in the game, and users will be left very vulnerable when reloading. Sleight of Hand is extremely helpful, as it can make the reload potentially take only 2.12 seconds to perform with proper reload cancelling.

Although the Grim Reaper can be used in an anti-aircraft role, one shouldn't primarily use the Grim reaper in this manner. No killstreak in Black Ops requires more than two rockets to be destroyed, meaning that any one killstreak can be destroyed just by using a Strela-3. If wanting to use the Grim Reaper in an anti-aircraft role, one should only employ it in this regard if there are several aerial killstreaks, such as multiple Spy Planes, Counter-Spy Planes, and an Attack Helicopter all in the air at once. The Grim Reaper may have the ammo to spare to use it in this manner, but going after aerial killstreaks leaves the player very vulnerable, something that needs to be avoided when using the Grim Reaper, since one death with the Grim Reaper deployed means the launcher is gone for the rest of the match, with little chance of getting another one.

The Grim Reaper in first-person view

Aiming down the sights of the Grim Reaper

Model of the Grim Reaper

The Grim Reaper being held in third person

Johnson wielding the Grim Reaper in "Victor Charlie" before being killed

A note pasted on the Grim Reaper's side 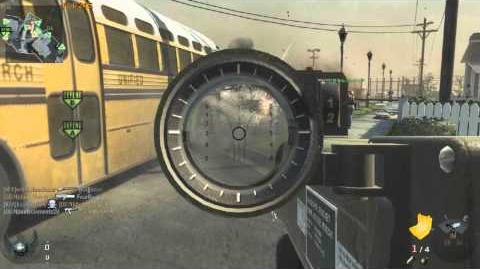