For the operator of the same name within the reboot, see Grinch (operator).

Russian Army troops or the collapse of the diamond mine (possibly)

"Not a good day to be Delta."
— Grinch in "Scorched Earth"

Sergeant First Class "Grinch" was a special forces operator who served in the U.S. Army's "Delta Force" in Call of Duty: Modern Warfare 3. He served in Team Metal (as Metal 0–3) alongside operators Frost and Truck under the command of Sandman. He served as the designated marksman for the team. Little is known about his past, but he possesses a southern accent, indicating that he probably grew up or spent considerable time in the southern United States. Grinch is also known for his consistency of wearing a baseball cap which he habitually wears forward; however, can be seen wearing it backwards while a gas mask is equipped. He also lacks his signature hat during Hunter Killer.

Grinch fought in the Battle of New York along with the rest of Team Metal. He participated in combat actions aimed at destroying the radio jamming device that was allowing the Russians to gain superiority in the battle before being extracted from the roof of the New York Stock Exchange via Black Hawk helicopter. He and the team were then inserted into New York harbor, where they rendezvoused with U.S. Navy SEALs and boarded a Russian submarine, launching its cruise missiles at the Russian fleet.

Two months after the Battle of New York, Team Metal was redeployed to Hamburg, Germany, in the aftermath of a series of chemical attacks across Europe. Along with Truck, Grinch stayed behind while Team Metal fought their way to the U.S. vice president and freed him from Russian forces who had captured him, and extracted him from the city.

Soon after rescuing the president, the unit was ordered to capture a Russian bomb maker named Volk, who facilitated the chemical attacks across Europe. They successfully apprehended Volk with the aid of the French GIGN. He had the job of keeping Volk safe while Team Metal fought to the secondary extraction point after the primary one was compromised by enemy troops.

Intelligence that Volk gave up led Delta to Berlin, where they attempted to rescue the Russian President's daughter, Alena Vorshevsky from Makarov's men. Two other Delta teams, Onyx and Granite, were killed in action during this operation, and Team Metal arrived too late to rescue Alena, Grinch aimed his MK14 at the heilicopter's tail rotor, but Sandman stops him, leaving Alena captured.

Ultimately, Delta teamed up the disavowed Task Force 141, consisting of John Price and Yuri, in a joint operation mission to Alena and the President. They arrived at Makarov's stronghold in a diamond mine in Siberia, where Delta, Price, Yuri, and other U.S. Army assets assaulted the mine. They successfully rescued Alena and Russian President Boris Vorshevsky. However, during extract, Grinch, Truck, and Sandman fell behind to cover the helicopter Price and Yuri were in as they escaped with President Vorshevsky. Sandman ordered the helicopter to extract without Metal, who were surrounded on three sides and running low on ammunition. As the helicopter escaped, the mine collapsed, burying the Utranationalist Russians as well as presumably most of Team Metal.

Grinch with his MK14 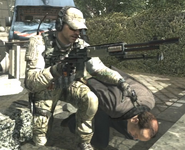 Grinch with a gas mask as seen in "Bag and Drag".

Grinch in "Down the Rabbit Hole".

Grinch with his scoped MK14.

Grinch with Sandman and Truck

Grinch being hit by a RPG.

Grinch rappelling deeper into the mine in "Down the Rabbit Hole".