"I can only assume that you intend to procure Group 935's research for your own twisted goals. Know this, my old friend: I will take whatever steps are necessary to ensure that you never leave the castle alive!"
— Groph in Der Eisendrache

Groph was a scientist at Group 935. He joined Edward Richtofen and Schuster in the construction of Griffin Station on the Moon. Once the station was completed, on February 1st, 1942, Richtofen made Groph the lead scientist of the station and charged him with finding how to power the Moon Pyramid Device. Six months later, Schuster unwittingly charged one of the tanks of the M.P.D. by killing a rat near the device. They reported their discovery to Richtofen who began sending soldiers and scientists to be sacrificed.

Groph continued to work alongside Schuster, they developed the Wave Gun in June 1945. Few months later, on October 12th, 1945, Groph reported to Richtofen that the M.P.D. was ready and opened. The next day, as a part of Richtofen's Operation Shield, Richtofen got rid of Ludvig Maxis and his daughter Samantha by teleporting them away from the Der Riese facility. However, Samantha was teleported to Griffin Station and ran inside the M.P.D, while Maxis was teleported to The Crazy Place. Groph teleported Maxis from a tunnel in The Crazy Place to Griffin Station as Richtofen asked him to find Maxis. Groph hoped that by confronting Maxis with Samantha, Maxis would persuade his daughter to get out of the device. Unfortunately, Maxis ordered Samantha to "kill them all" and then merged with Griffin Station's electronics upon death. Samantha unleashed the undead upon the base, leaving Groph, and the rest of Group 935 on the Moon, at her mercy. It is unknown if Groph survived the outbreak.

When Primis (Richtofen, "Tank" Dempsey, Nikolai Belinski, Takeo Masaki) arrived at the Der Riese facility and Richtofen killed his Ultimis self, moments after he teleported Maxis and Samantha away, it triggered fractures across space and time. One of those fractures, called Deceptio, saw Samantha not being teleported to Griffin Station.

Two weeks after the disappearance of Maxis and in the absence of Richtofen, Groph took control of Group 935 on October 29th, 1945. Groph decides to put on hold all further tests of the M.P.D. Despite putting all of the M.P.D tests on hold, people around the M.P.D still heard voices from the M.P.D, specifically Maxis's voice saying "I must go to her, the loop must be closed". Groph still felt the presence of Samantha in his dreams. He is concerned that the M.P.D corrupts and clouds the mind.

The next week, on November 5th, Primis arrived at Eagle's Nest to retrieve Ultimis Dempsey. Groph was relieved to hear Richtofen was alive when he made contact with the facility, not knowing of the situation at Der Riese, nor the fact that he wasn't talking to the same Richtofen. He, however, grew increasingly suspicious of Richtofen's sudden change of personality before saying he must do whatever it takes to prevent him from escaping the castle alive. Groph was unsuccessful in his attempts to stop Primis as they managed to bring back Ultimis Dempsey down to Earth and, with the help of a Keeper, teleported the M.P.D. inside the castle. 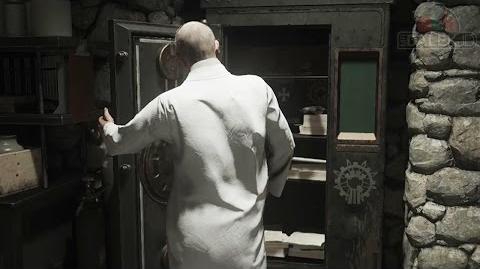