"To improve the human condition."

"We were supposed to help the human condition, not destroy it."
— Ludvig Maxis to Edward Richtofen on Moon

Group 935 was formed on May 10th, 1931 by Doctor Ludvig Maxis after the discovery of deposits of Element 115 at Breslau in Germany. The Group was created as an international organization dedicated to the study of Element 115 and the Der Riese facility was established near Breslau. In 1936, Maxis invited Doctor Edward Richtofen to join Group 935; Richtofen agreed, secretly acting on behalf of the Illuminati's interests.

In 1939, Maxis and Richtofen started teleportation experiments with the Matter Transference Prototype, to mild success. However, they discovered Element 115 could resurrect the teleported corpses. On September 3rd, Richtofen began development of the Wunderwaffe DG-2, the prototype would be completed in January 1942. On November 23rd, Maxis turned to the Reichstag for additional funding. The Nazis agreed to the request, expressing interest in Group 935 weapons research, teleportation technology, and the undead as World War II escalated.

On December 4th, 1939, Richtofen and Doctor Schuster achieved the first successful teleportation using a walnut. This achievement failed to impress Maxis who revealed to Richtofen that Group 935 would soon be funded by the Nazi Party. Richtofen and Schuster decided to continue the experiments behind Maxis' back and on January 4th, 1940, Richtofen volunteered himself and was teleported to the Moon where he discovered the Moon Pyramid Device (or M.P.D.) which altered his personality. Richtofen returned to Schuster two weeks later with a plan to build a base on the Moon. The construction of the base, called Griffin Station, began on March 13th, 1940; with Group 935 alignment with Nazi Germany, more disgruntled scientists joined Richtofen's cause.

On July 13th, 1940, Maxis instructed his assistant Sophia to write a letter to the Reichstag High Command requesting additional funds as the Der Riese facility lacked funding and sufficient volumes of Element 115. In response to Maxis' request, the Nazis created the following month two new facilities for Group 935, the Kino Facility, a re-purposed theater, and the Asylum Facility both located in Berlin. The Imperial Japanese Army also handed over the Rising Sun Facility to Group 935, with Division 9 remaining involved on site. Maxis developed the Ray Gun Prototype at the Rising Sun Facility in 1942. Group 935 also established research facilities near the Tunguska River in Siberia and at Eagle's Nest in the Austrian Alps.

On February 1st, 1942, Griffin Station was completed and Richtofen named Doctor Groph as lead scientist in the base and charged him with finding a way to power the M.P.D. As a result of temporal rifts created at the Kino facility in 1965, Monty helped Group 935 developping four Element 115 fused elixirs known colloquially as Juggernog, Quick Revive, Speed Cola, and Double Tap Root Beer. Richtofen shared the recipes to Griffin Station which in turn created Mule Kick. On June 28th, 1942, Group 935 continued their work on a Weapons Upgrade Machine.

On July 18th, 1942, Groph and Schuster unwittingly discovered how to charge the M.P.D. after Schuster killed a rat near the device. Two days later, Richtofen began sending soldiers and scientists to be sacrificed at Griffin Station. On December 14th, 1942, Richtofen created the Monkey Bomb. On December 16th, 1942, Maxis expressed concern over Element 115's impact on Richtofen's behavior. He wondered if it was a mistake to invite him to Group 935. Few days later, Maxis was transferred to the Kino Facility with Sophia to focus on creating an undead army for the Nazi. Samantha was left in Richtofen's care.

On January 16th, 1943, Nikolai Belinski is captured in Stalingrad and became a subject in Group 935 experiments.

On January 27th, 1943, Maxis reported success with Subject Two-Six during his work on obedient undead soldiers. However, Two-Six's behavior deteriorated during the following weeks and was killed. Harvey Yena began working at Group 935 on May 18th, 1943 where he developed the Scavenger and its upgraded version, the Hyena Infra-Dead.

On July 24th, 1943, Takeo Masaki was captured by Group 935 and Division 9 at the Rising Sun Facility on the orders of the Japanese Emperor. He was used as a test subject for Group 935. The following year, Pablo Marinus, a Mexican spy, was captured at Eagle's Nest.

On June 17th, 1945, OSS operative Peter McCain infiltrated Group 935 at the Der Riese Facility. He would be ousted as a spy and capture by Group 935 two months later.

On July 15th, 1945, Richtofen traveled to the Siberian Facility to do further research on "live specimens". He brought Samantha with him. While Richtofen was at the facility, Group 935 developed another elixir, Deadshot Daiquiri. On August 1st, 1945, Nikolai, Takeo and Pablo arrived in Siberian; Richtofen started the experiments immediately. A month later, Pablo died following a spleen removal. Richtofen also experimented on Samantha.

After the end of WWII, an outbreak occurred at the Asylum Facility and Peter's handler, Cornelius Pernell, sent a Marine Recon team to extract him. The team, led by "Tank" Dempsey, arrived too late and Dempsey was apprended by Group 935 and was sent to Richtofen. On September 24th, 1945, Maxis returned to Der Riese to resume the work on the Matter Transference Device. Richtofen returned to the facility few days later with Dempsey, Nikolai, Takeo, and Samantha.

On October 1st, 1945, after learning the DG-2 has not been mass-produced, Richtofen began plotting against Maxis and Samantha. A week later, Groph reported to Richtofen that the M.P.D. was nearly ready. On October 12th, 1945, Groph reported the M.P.D. was powered and opened, Richtofen replied he would proceed with Operation Shield and disposed of Maxis and Samantha. The next day, Maxis and Richtofen worked on the teleporters and used Samantha's dog, Fluffy, as one of the test subjects. Fluffy was teleported but came back to the chamber changed. When Samantha saw Fluffy, she ran inside the teleporter followed by Maxis. Richtofen saw the opportunity and locked them inside the device before teleporting them away.

Maxis was teleported to The Crazy Place where he learned how to merge with electricity. Samantha was teleported to Griffin Station and ran inside the M.P.D. forcing Groph and Schuster to teleport Maxis in the base in the hope that he would persuade her to get out of the device. However, Maxis instructed Samantha to "kill them all" before killing himself. Samantha unleashed the undead upon the base. The next day, on October 14th, 1945, an outbreak occurred at the Der Riese facility. Doctor H. Porter activated the alarm before taking a cyanide capsule, killing himself. Richtofen returned to Der Riese and awoke Dempsey, Nikolai and Takeo before starting their journey through time and space. They would be known as Ultimis.

Group 935 was officially disbanded on November 5th, 1945. 40 scientists and their families joined the United States as part of an agreement between Richtofen and the Allied Powers known as Operation Stapler, among them was Doctor Schuster. Other scientists were hired by the Soviet Union like Harvey Yena who would formed the Ascension Group. The Soviets also recovered Richtofen's journal from Der Riese.

When Primis (Richtofen, "Tank" Dempsey, Nikolai Belinski, Takeo Masaki from Dimension 63) arrived at the Der Riese facility and Richtofen killed his Ultimis self, moments after he teleported Maxis and Samantha away, it triggered fractures across space and time. One of those fractures, called Deceptio, saw Samantha not being teleported to Griffin Station.

Days after the disappearance of Maxis and in the absence of Richtofen, Groph took control of Group 935 on October 29th, 1945. The next week, on November 5th, Primis arrived at Eagle's Nest to retrieve Ultimis Dempsey which led to the destruction of Griffin Station and the Moon. The fate of Group 935 after the loss of station is unknown.

On February 12th, 1943, Sophia was attacked by Subject Two-Six while working with Maxis at the Kino Facility. Two days later, after hearing about the attack, Maxis killed Sophia and transferred her brain into a machine, the Strategic Operations Planning Heuristic Intelligence Analyzer or S.O.P.H.I.A. On July 7th, S.O.P.H.I.A. was transferred to Stalingrad to oversee Group 935 operations.

With the release of Element 115 and the deployment of Valkyrie Drones in the city S.O.P.H.I.A. declared the Battle of Stalingrad was nearing victory for German Forces on April 14th, 1944. However, the battle continued for years between the machines, the undead and the dragons and without any remaining Group 935 survivors S.O.P.H.I.A. became trapped inside the city.

Primis arrived at Stalingrad on November 6th, 1945. They freed S.O.P.H.I.A, fought Ultimis Nikolai and retrieved his soul before leaving. The situation of Group 935 outside the battle is unknown.

In Dimension 63, Edward Richtofen and Ludvig Maxis joined Group 935 on July 3rd, 1912. Group 935 was also active during World War I. In 1915, Maxis developed the Mauser C96 Prototype. Group 935 recovered in 1916 the journal of Sir Pablo Marinus, a knight during The Great War; using the information found in the journal, they discovered a series of underground tombs in a dig site in northern France on March 23rd, 1917. After unsuccessful attempts at opening the main chamber, soldiers unwittingly opened the chamber after listening to a recording of "La Source Noire". The camp's exposure to Element 115 began shortly after. Maxis dubbed this new element Divinium.

Group 935 started working with Divinium and successfully created portals across space and time on June 11th, 1917. The rifts allowed Samantha to reach out to Maxis from Agartha, revealing she was his daughter and begged him to help her. An "ancient box" also arrived through a portal. Group 935 continued working at the dig site with the installation of Element 115 powered generators on July 1st, reawakening some the Templar Zombies which led to the disappearance of several soldiers.

On September 10th, 1917, Group 935 constructed three Giant Robots, Freya, Odin and Thor powered with Divinium. They believed they would secure victory for Germany. The relations between Maxis and Richtofen started deteriorating as Richtofen stayed loyal to Group 935 and their desire for yet more devastating weaponry while his mentor, obsessed with Pablo's journal, started doubting Group 935's mission. Maxis also started to hear Samantha more often.

This situation led Richtofen to file a report, on May 12th, 1918, about Maxis' erratic behavior to Group 935's senior staff, believing he has been affected by the Divinium. Two days later, Maxis was completely consumed by Samantha's voice and swore he would no longer serve Group 935.

On June 4th, 1918, "Tank" Dempsey, Nikolai Belinski and Takeo Masaki, sent by their respective countries to investigate Group 935's activities, arrived at the dig site which was overran by zombies. Edward Richtofen was the only survivor, Maxis was rendered catatonic by Divinium and Richtofen had to remove his brain before he turned, putting it in a drone. The four men freed Samantha from her imprisonment in Agartha and started a journey across time and space, they would be known as Primis. The fate of Group 935 after the loss of the dig site is unknown.

The Group logo on the film reel in Kino Der Toten.

The Group 935 logo as it appears in the Call of the Dead end cut scene. The actual door is seen in Der Riese. 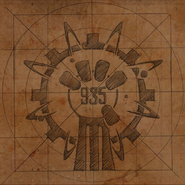 A drawing of the Group 935 logo as seen in the Zombies Chronicles timeline poster.