Call of Duty Wiki
Register
Don't have an account?
Sign In
Advertisement
in: Call of Duty: WWII Nazi Zombies Enemies

"This race... tall, pale and powerful. They must have been like gods to our ancestors."
— Marie Fischer

The Guardian is a special Zombie in Call of Duty: WWII. It appears as a boss in "Beneath the Ice", the third and final chapter of The Tortured Path. It was awaken by the Raven team of the MFAA after they reforged the Sword of Barbarossa.

The Guardian is a giant albino zombie. It has massive excrescences at the end of its arms, using them as clubs. It can also pull its victims toward it, like a magnet. When hurt, it drains the blood from several gargoyle-like statues above the forge chamber. 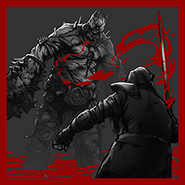