For a similar upgrade in Exo Zombies, see Exo Soldier.

Gung Ho reduces the sprintout time to 0, making it so the weapon is always ready to be hip-fired if possible.

When using Gung-Ho on shotguns, the spread of pellets while sprinting increases dramatically except on the Tac-19 and S-12. On those shotguns, the hip-fire spread increases a fair bit, but nowhere near as severely as other shotguns. All Akimbo weapons do not receive penalties from this perk, and as such, makes the perk near-essential, allowing users to sprint while not sacrificing functionality of the weapons. The MDL receives great benefit from Gung Ho, as it has almost no accuracy loss when firing from the hip. Gung Ho is also a viable choice on almost all SMG's, as all of the SMG's can effectively use hip-firing. Gung Ho has no use whatsoever with the Atlas 20mm or the Combat Knife/Tactical Knife, as those weapons do not utilize hip-fire.

Gung-Ho returns in Call of Duty: Black Ops III as a default perk, and with slight adjustments; as players can already fire while sliding without Gung-Ho, the perk focuses more on freedom while sprinting, allowing players to also use equipment and fire their weapon while retaining the sprinting movement speed.

Note that Gung-Ho does not allow the player to immediately fire their weapon while sprinting, as the player must still wait for a small period of time equal to their weapon's sprint out time to fire, making Fast Hands and Gung-Ho a less redundant combination; in fact, combining the two further reduces sprint out time.

It also does not effect a melee weapon swing or weapon butt swing.

"Shoot, use equipment and scorestreaks while sprinting."
— In-game description.

Gung-Ho returns in Call of Duty: Infinite Warfare. It lets users shoot, use equipment and call in scorestreaks while sprinting. It is unlocked by default. 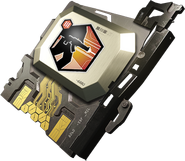 Gung-Ho inspect model in Create-a-Class.
Add a photo to this gallery

Retrieved from "https://callofduty.fandom.com/wiki/Gung-Ho?oldid=2527148"
Community content is available under CC-BY-SA unless otherwise noted.