Call of Duty Wiki
Register
Don't have an account?
Sign In
Advertisement
in: Call of Duty: Black Ops Killstreak Rewards

The Gunship is an 11 killstreak featured in Call of Duty: Black Ops. It costs

6000, and is awarded upon achieving an 11 killstreak, or a 10 killstreak while using Hardline. The player has full control of the gunship including movement, miniguns and missiles. However, like in Payback, the player cannot control altitude. As such, the Gunship flies at a very low altitude over the maps, which can lead to it being easily shot down. To balance gameplay, the Gunship only comes equipped with two missiles at a time (however, they will automatically regenerate after a while), but has unlimited rounds in its nose cannon that doesn't overheat.

Due to a patch, the Gunship now has a red diamond render delay. This means when enemy players spawn, there will be a delay before the red squares (or diamonds) are seen around their bodies making it more difficult to spawn kill. This update also affects the Chopper Gunner killstreak.

The Gunship is often best used on objective gametypes, especially modes where Spawn Trapping can be utilized, as the Hind can be piloted and hovered above the enemy spawn for maximum kills, instead of in Killing-based modes (Team Deathmatch and Free-for-All) where the enemies' spawns often change, needing the helicopter to be moved.

The effectiveness of this killstreak depends entirely on the competence of the enemy. Most players will switch to an anti-air class as soon as the announcer calls in a Hind, effectively destroying it seconds after it is called in. However, if the enemy does not shoot down air support at all, then the Hind can easily destroy the entire enemy team in seconds. A wise tactic to prevent being shot down is to target enemies that are staying still, as they are most likely trying to get a lock on the Hind with a launcher, as opposed to targets running for cover.

It also may be effective to locate the enemy spawn and hover there until it changes, making it so that players using ghost are visible and easily shot, or likely to be shot in fire meant for other enemies. The missiles can also be used to clear out larger chunks of land of possible enemies.

The Gunship is a wildly unpopular killstreak. One cannot use the Attack Dogs when using the Gunship, and the Gunship serves an extremely similar role to the Chopper Gunner, which needs two less kills and doesn't conflict with any other killstreaks. The Gunship needs to be positioned properly by the player, making it harder to aim, whereas the Chopper Gunner moves in a predictable pattern on its own, allowing the player to focus solely on aiming. As such, most Gunships seen in matches are those acquired via Care Package, as very few players are willing to use the Gunship in their main killstreak loadout.

A SAM Turret is capable of destroying the Gunship, so the player should prioritize destroying one if it is called in whilst the Gunship is in play.

Quick-thinking and skilled players that are experienced with the Gunship can outright evade locked missiles from Launchers even when all the flares have been depleted, assuming they are a distance from people utilizing launchers. 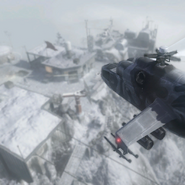 View from the player's perspective.

The Gunship seen from a third person perspective in the multiplayer map Array. As seen, its color scheme seems to be different from the Create A Class image. 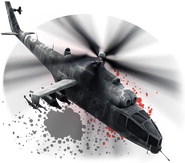 The Gunship seen from Call of Duty ELITE 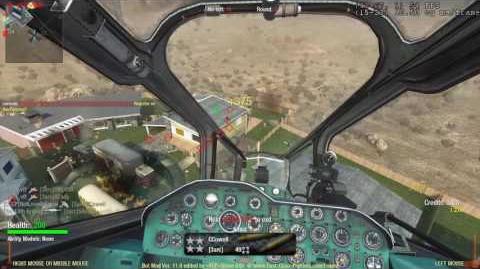