Armaguerra 43, any weapon obtained by the player

"Some soldiers weren't so lucky when they were forced to fight in a war for which they weren't prepared. But if there's one thing about Gustavo dos Santos... he's always gonna try his luck. Whether it's a night at the casino, or a night raiding Nazi intel, you can bet Gustavo's gonna hit the jackpot."
— Carver Butcher

Known as a wealthy playboy in Brazil, Gustavo dos Santos fled the country and settled in Paris and became a frivolous socialite. After an unexpected encounter with a member of the French Resistance, Gustavo learned about Nazi Germany's secret plans for Brazil and risked his life to deliver the intelligence to his homeland. He then joined the Brazilian Expeditionary Force, also called "The Smoking Cobras", taking part in the Battle of Monte Castello in Italy.

At some point, Gustavo was approached by Carver Butcher and the S.O.E. to form the Task Force Yeti with the goal of infiltrating a German stronghold inside a medieval castle in the Alps. Led by Butcher, alongside Anna Drake and Thomas Bolt, Gustavo entered the castle in search for information regarding Nebula-V. The team fought their way to reach a door where Nebula-V was stockpiled, a German soldier released the gas while celebrating the Fourth Reich before being shot by Drake. The team regrouped with Butcher, quickly leaving the area as the gas spread throughout the castle as German soldiers tried to escape the castle. 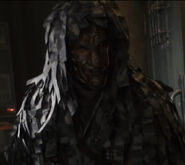 Gustavo next to a Portable Decontamination Station.