For a similar scorestreak, see Orbital VSAT and Blackbird.

The H.A.T.R. (High Altitude Telemetry and Reconnaissance) is a scorestreak featured in Call of Duty: Black Ops III.

The H.A.T.R. has similar effects to the SR-71 Blackbird and Orbital VSAT from previous Black Ops games, displaying enemies' locations and direction on the minimap. However, unlike the latter two, it can be shot down, although only by launchers.

It takes three hits from a launcher to destroy the H.A.T.R., making the BlackCell more optimal than the XM-53. Because of its high altitude and speed, it can outrun locked-on rockets that are fired too far away. If no players on the affected team have a launcher, it is better to just ignore it then.

The effects of the H.A.T.R. 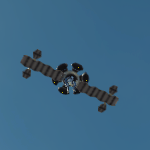