The H.I.V.E. is used by Nomad and Blackjack in multiplayer. It is a launcher that can be used to deploy up to five pods that act as proximity mines to enemies. These pods will stick to any surface, with the exception of the robot in Safeguard. After an enemy approaches one, the pod will go off, releasing several small nano-drones that swarm the enemy player, killing them instantly by gibbing their arms and legs off. If an enemy scorestreak approaches one, the swarm will damage it, often killing it with just one or two pods.

Shooting or otherwise damaging the pods will destroy them if they have not gone off yet. Hard Wired will not protect the player from triggering the pods. There are a few ways to save the player from dying after the pod has gone off if they are quick enough to deploy it: Trophy System, EMP Grenade, Heat Wave, Gravity Spikes, and Glitch. Sliding can also help, but it will only work if the player slides off of ledges of objects and buildings.

The pods will stay even after the H.I.V.E. has expired, and will persist until they are set off, destroyed, the round/game ends, or the player that deployed them respawns. If the player has pods deployed on the map and is killed, it is oftentimes worthy to not skip the killcam, as the pods will not disappear until the player respawns, giving the pods roughly five seconds of extra time. Only five pods per player can exist on the map, and if more are placed, the previous ones will vanish individually.

Shooting the H.I.V.E directly at an enemy will have the pod stick to them and, after a short delay, kill them as per usual. The pods can also be deployed underwater.

When placing the pods it's advisable to place them near doorways, choke points, or near routes with high traffic. It's very important to place the pods in areas that make the hard to spot due to the fact that they are very easy to spot. Another tip is to put distance between the pods to prevent an enemy from setting off multiple pods at once.

With some skill the H.I.V.E can be used as a makeshift grenade launcher. If the player is accurate the player can fire the pods at other enemies and potentially score a direct hit killing them in a matter of a few seconds. but due to the pods low ammo count this is a risky plan.

When facing against H.I.V.E pods its important to keep a lookout if a pod as been spotted. Players should use caution until each pod is destroyed or until Nomad is killed. Engineer assists with spotting pods drastically, as the player can see through objects and detect the pods, but only if the player spots them quick enough. If a pod has been set off by a player they should attempt to set off the other pods in an attempt to destroy them by doing so.

Aiming down the sights of the H.I.V.E.

Nomad with his H.I.V.E. in the selection screen

The effects of the H.I.V.E. 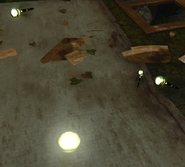 A Trap Pod placed by a friendly 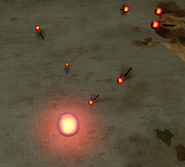 A Trap Pod placed by an enemy

A pod being triggered and killing an enemy

Pre-alpha model of the HIVE.

"Use a hive gun to launch a trap of proximity mines. When triggered, the mines will release a swarm of nano drones that kill nearby enemies."
— Description

The H.I.V.E. returns in Call of Duty: Mobile as an Operator Skill. It was added as part of the Season 4 Disavowed update.