For the attachment with a similar name, see HAMR Scope.
For the assault rifle variants, see SCAR-L and SCAR-H.

The HAMR is available to use after completing the mission "Cordis Die". It is commonly seen being used by the Yemeni Army in the level "Achilles' Veil". Unlike its counterpart in multiplayer and Zombies, the HAMR in the campaign has a constantly high rate of fire of 937 rounds per minute, like the QBB LSW. It can also be found in the missions Karma where Mercs use it.

The HAMR is unlocked at level 37.

The HAMR is a moderate damage-per-bullet LMG. At any range short of 38 meters the HAMR will deal forty damage, taking three shots to kill regardless of bullet placement. At any range between 38 meters and 75 meters the HAMR will deal thirty damage, taking four shots to kill or three if at least two bullets hit the head. The HAMR will deal 24 damage at any range past 75 meters, resulting in a five shot kill, a four headshot kill if any bullet hits the head, and a two shot kill in Hardcore game types, but sightlines longer than 75 meters are scarce in Black Ops 2 Multiplayer, so needing this number of shots to kill should rarely be expected. The HAMR's damage profile is almost identical to the LSAT's, but with a slight boost (roughly three meters extra) to three hit kill range. The HAMR also has high penetration power, allowing the HAMR to be an exceptionally dangerous weapon when shooting thru surfaces given its good damage output, initially high fire rate, and increasing accuracy the longer the burst.

The HAMR has a variable rate of fire. For the first seven rounds in a burst, the HAMR will fire at 937 RPM, the fastest possible for an LMG. However, after the first seven shots within a burst, the HAMR's rate of fire will decelerate to 625 RPM, the slowest possible for an LMG. Attempting to fire in quick bursts of five, six or seven can be extremely beneficial to making the HAMR fire as quickly as possible. It's this fire rate that serves as one of the HAMR's unique attributes. The HAMR suffers from an odd glitch with the Hybrid Optic. When firing, if the player switches between the two optics very quickly whilst sustained firing, the HAMR's burst will reset, essentially locking the HAMR into the highest fire rate and recoil amount possible for the HAMR while holding sustained fire. This can also essentially act as a makeshift Rapid Fire attachment for the HAMR, since sustained fire while successfully performing the glitch will not lower the HAMR's fire rate, whereas with Rapid Fire, sustained fire would drop the HAMR's fire rate to 833 RPM.

The HAMR's accuracy is also very bizarre for an LMG. The iron sights are quite clear, but the recoil profile is the highest in the LMG class, and the centerspeed is the slowest in the LMG class, at 1650. Unlike other LMG's, this centerspeed cannot be increased when crouching or going to prone. The HAMR's recoil per shot reduces by three percent for each bullet in a burst, up until fifteen percent, or by the time the fifth bullet in a burst is fired. This gives the HAMR a dual-personality: initially the overall recoil profile will be very heavy as the fire rate will be elevated and the recoil will be full force. By continuing to fire, however, the HAMR will stabilise significantly, firing at a much slower rate and kicking at a smaller scale.

For an LMG, the HAMR has favourable handling characteristics but poor handling characteristics overall. The HAMR will move at ninety percent of the base speed, aim down the sight in 450 milliseconds, move at 32% of the base speed when aiming, and have large hip-fire crosshairs. The HAMR has the second fastest reload of all LMG's, reloading in 4.25 seconds for a partial top-up, or 4.8 seconds if the drum magazine was empty. In either case the HAMR will perform a Reload Cancel in a sprightly 2.5 seconds. This makes the HAMR much less likely to render the user defenceless against an enemy should one find the user mid-reload.

The HAMR's magazine capacity, while great in the grand scheme, is not impressive for an LMG, at just 75 rounds. This smaller magazine capacity has an adverse effect on the HAMR's starting ammo loadout: the HAMR will have three magazines total upon spawning in, giving the player a total of 225 rounds. While not bad by any means, this is the worst possible for an LMG.

The HAMR has access to the typical set of LMG attachments. All of the optical gunsights are available to the HAMR, but perhaps the Hybrid Optic would be the favourable choice if the user desired a sight, giving two different sights within one attachment and access to the aforementioned glitch, something no other attachment is capable of doing.

The Quickdraw Handle, Adjustable Stock, and Laser Sight are three attachments that can heavily ameliorate all of the HAMR's major handling woes. All three of the attachments on one class can make for a very well-rounded weapon that can be somewhat reactionary and be a potent CQC threat while still being a force to be reckoned with at medium ranges.

The Suppressor reduces range values by thirty percent and reduces centerspeed by two percent. This makes the HAMR take more shots to kill in many medium range situations and makes five shot kills more common on long range sightlines, in exchange for stealth abilities. The HAMR is a good LMG to consider the Suppressor since the HAMR fires quickly at the start of bursts and has moderate damage output for an LMG.

Rapid Fire has multiple odd effects on the HAMR considering the HAMR's mechanics regarding fire rate: the first seven rounds in a burst will be fired at a rapid 1250 RPM, and all shots afterwards will fire at 833 RPM. This makes the HAMR much faster firing overall, but Rapid Fire has a heavy price to it: the centerspeed is reduced to 1402, all range values are decreased by forty percent, and the hip-fire crosshairs are made twenty percent wider. Additionally, Rapid Fire can be used in conjunction with the Hybrid Optic glitch in order to consistently fire at 1250 RPM. However, using Rapid Fire requires a great deal of practice considering how inaccurate it will cause the HAMR to become.

FMJ increases the HAMR's penetration power, and makes the HAMR among the deadliest of weapons when firing through objects. While the Mk 48 has a significantly better damage output, the HAMR combines a good damage output and a high initial fire rate to allow the HAMR to make quick work of enemies when firing through surfaces. The lightest of surfaces will make little difference to damage with FMJ equipped, and moderately thick surfaces such as concrete walls will serve as less of a deterrent to damage.

Extended Clip boosts the HAMR's magazine capacity to one hundred rounds, equal to the capacity the Mk 48 and LSAT possess. This makes the HAMR also boost its starting ammo loadout to three hundred rounds total instead of 225. This does make the HAMR reload ten percent slower, but considering how quickly the HAMR can reload, the extra milliseconds are mostly inconsequential.

The HAMR appears in all Zombies maps, except Mob of the Dead. It starts out with a 125-round magazine with 375 reserved. It is one of the more useful weapons, dealing moderate damage, having a large magazine, and possessing a moderately fast reload time for a light machine gun. These advantages are somewhat tempered by the HAMR's very poor accuracy, kicking significantly while bursting, although at a close range, this recoil isn't much of a factor. Double Tap Root Beer is useful for increasing the damage dealt, but its traits are offset by the even further increased recoil and ammo consumption, and Speed Cola helps to shorten the lengthy reload. Stamin-Up can be used to increase mobility, though Stamin-Up is not featured in Nuketown Zombies as it must be switched to a lighter weapon to be at a distance as the HAMR is not CQC-friendly. The large amount of recoil, however, hinders its accuracy at longer ranges, making burst firing a priority to conserve ammo and increase accuracy. Its extremely large ammo loadout, magazine capacity, and damage output over time make the HAMR a prime candidate for use in a primary role, making for a powerful weapon capable of tacking multiple zombies without pause if the drum mag is full.

When Pack-a-Punched, it becomes the SLDG HAMR. The SLDG-HAMR has greatly decreased recoil, making overall shooting much more accurate. As well, the damage profile is increased by a decent amount. The SLDG-HAMR is one of the weapons that can be Pack-a-Punched multiple times to cycle through attachments. Possible attachments include an ACOG Scope, a Reflex Sight, and a Foregrip. The SLDG-HAMR is one of the most sought-after weapons in the Zombies game mode, as its balance between strong fully automatic power, accuracy, and a huge magazine make for an extremely effective weapon to take down a zombie horde.

The HAMR in first-person. 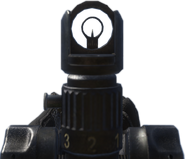 Diving with the HAMR.

Render of the HAMR's model (without the magazine).

The HAMR appears in Call of Duty: Strike Team.

The HAMR in the Armory found on Rift.