The HBRa3 is an assault rifle featured in Call of Duty: Advanced Warfare.

The HBRa3 is a standard assault rifle with medium damage and recoil. The gun fires the first 3 rounds faster than others making it best used in a burst fashion. With the manageable recoil and damage of the weapon, it excels at medium ranges, and out to longer ranges if used to burst fire to conserve ammo, something made easier by the guns inbuilt first 3 bullet speed up. This effect can also aid in close quarters, allowing the player to get off 3 shots quickly to aid against their assailant. The irons sights can be seen as quite obtrusive, and using an optic is recommended for using the gun at longer ranges for a clearer view on target. The gun has nothing special regarding its hip-fire spread, making the laser sight an optional choice, but greatly useful if using the weapon in close quarters often. Utilising the Quickdraw Grip and Stock can also aid the weapon in close quarters, by allowing faster movement with the weapon generally, and the Quickdraw Grip can aid with longer range firefights by allowing the player to aim down sights on an enemy target faster. Reload times are manageable and the rate of fire is low enough that Dual Mags and Extended Mags are not a necessity, however come in handy should the player use the weapon for extended periods of fire, or having to reload in the middle of combat. Utilising the Foregrip can lower the moderate recoil to to a much lower amount, making the weapon far better at range due to more manageable recoil, allowing more shots to reliable to hit their target. 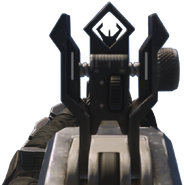 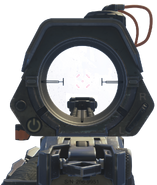 Aiming with the ACOG Scope.

Reloading the HBRa3.
Add a photo to this gallery
Retrieved from "https://callofduty.fandom.com/wiki/HBRa3?oldid=2166877"
Community content is available under CC-BY-SA unless otherwise noted.