For the wheeled version from previous games, see RC-XD.

The HC-XD (Hover Capable/Controlled-eXplosive Device) is a Scorestreak in Call of Duty: Black Ops III. It functions similarly to the RC-XD from Call of Duty: Black Ops, but has hover capabilities. It can perform double jumps, and is capable of driving on any walls that a player can wall run on. It will hover along the surfaces of water, making it unable to drive underwater. It can also receive a boost of speed by pressing its corresponding button.

The corresponding buttons for boosting and jumping can be seen on the HUD.

It appears in the Multiplayer as a Scorestreak and also makes a minor appearance in the Campaign with its bomb disposal variant.

The HC-XD is a remote-controlled robot that can be equipped with explosive packages as well as other equipment. The robot is manufactured in large quantities by both the Winslow Accord and the Common Defense Pact. The design is based on the now obsolete RC-XD system, which was manufactured by Tacitus Corporation during the mid-2020s and deployed by special forces units.

While capable of being used as a remote-controlled weapon, the robot's chassis have additional variants. One such variant is the "bomb sniffer" variant, which has its explosive charge vastly reduced in size, now intended to disrupt suspicious packages and explosive devices, rather than to inflict wide-spread injury or death. The space gained from reducing the charge has been filled with various chemical sniffers, intended to inform the operator of proximity to a wide variety of explosives. Because it is intended for bomb disposal rather than combat, the explosive charge is too weak to be of much use in battle, being unlikely to even be able to take down a G.I.U.

The HC-XD should be thought of as a powerful bomb that can be placed anywhere on the map. This makes it useful beyond killing enemy players, as it could also be used to destroy enemy scorestreaks such as sentry guns or even Talon units with a well timed jump.

In most cases, a player with Flak Jacket will survive the explosion if they have full health when the HC-XD explodes. However, as of a recent patch, a damage buff enables the HC-XD to kill a enemy with Flak Jacket, provided it is close enough. 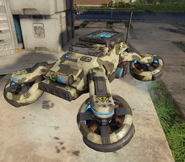 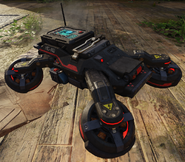