The HG 40 (referred to as MP40 in the game files) is a submachine gun featured in Call of Duty: Black Ops III and Call of Duty: Mobile. It is a modernized version of the MP40 from previous Call of Duty installments.

"Full-auto submachine gun. Blitzkrieg your enemies and protect your squad with this versatile weapon that packs a punch."
— In-game description

The HG 40 was added in the March 21, 2016 update, and is obtainable through Supply Drops. It is a three to five shot kill SMG, the three shot kill range is fair at nine meters, beating the Kuda which has a range of five meters. However, it suffers from the lowest fire rate of all submachine guns, firing at 517 RPM like the Man-O-War assault rifle, but Rapid Fire raises it to 550 RPM. It is comparable to the Razorback, because it also has low recoil for the first few shots and a fast reload speed.

The HG 40 is featured in the Zombies maps Zetsubou No Shima and Gorod Krovi, where it can be acquired from the Mystery Box for 950 points. It is automatically equipped with a Stock and Quickdraw.

Although it has similarities to its predecessor, the MP40, the HG 40 still has several statistical differences, such as a higher reserve ammo capacity, lower recoil, and lower damage. Its most notable statistical similarities are its 32-round magazine, which is about average size for a submachine gun, and its recoil pattern, as well as its rate of fire.

Its damage and rate of fire can be a problem when faced with a large group of zombies, because if the player gets cornered they cannot rely on the HG 40 well to kill zombies quick enough to make a safe passage for the player to escape through. However, its high reserve ammo capacity, combined with its decent magazine size, make it a worthwhile weapon to keep and use when not in danger because the player will be able to use it for quite a while before running out of ammo.

Using Double Tap Root Beer 2.0 with the HG 40 may be necessary, and is not a bad idea, because it may need the higher damage and rate of fire. Plus, its low recoil combined with its high reserve ammo capacity means the player will be able to control the weapon easily still and the weapon will have plenty of ammo to burn through.

The HG 40 is one of the few weapons not included in Weapon Kits, which means the player cannot customize it with attachments. Instead, the gun comes pre-equipped with Quickdraw and Stock. This hinders its performance, and potentially its value, for players who have gotten lots of attachments for their other weapons, as well as potentially its performance compared to other non-Weapon Kits weapons. For players who have unlocked little to no attachments yet, however, it will not make a major difference except in the fact that no attachments can be unlocked for the weapon.

Before an update, the HG 40 had a much higher rate of fire and lower recoil.

First-person view of the HG 40 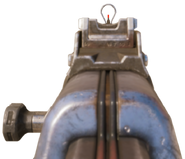 First-person view of the Afterburner 2.0
Add a photo to this gallery

The HG 40 returns in Call of Duty: Mobile. 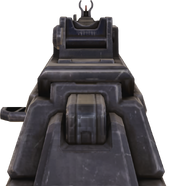 Reloading the HG 40.
Add a photo to this gallery

Retrieved from "https://callofduty.fandom.com/wiki/HG_40?oldid=2489244"
Community content is available under CC-BY-SA unless otherwise noted.