"Rapid firing submachine gun, that rechambers when the trigger is released."
— In-game Description

The HLX 4 boasts a high rate of fire as well as manageable recoil and overall smooth handling characteristics. However, the weapon's weakness is having to rechamber every time the player stops firing, contrary to LV8 Basilisk and P-06 which have a delay before firing. This delay is about half a second, and makes burst firing ill-advised as it makes the player very vulnerable and the recoil is easy enough to control either way at most ranges. Due to the six-shot-kill at longer ranges, it is recommended to stick to close quarters with the HLX 4.

Fast Mags and Extended Mags are recommended attachments, as the high rate of fire burns through the 36-round magazine quickly. Stock is also worthwhile due to HLX 4's slow strafing speed, or alternatively, Laser Sight reduces the need to aim down the sight to allow for better movement while firing. Optical attachments may be useful, but not required due to the open iron sights.

The HLX 4 in first person 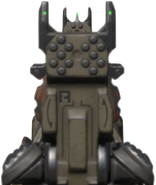 Picking the HLX 4 up
Community content is available under CC-BY-SA unless otherwise noted.
Advertisement