"The HVK-30 combines the best of a long generation of tried-and-true battle rifles with the latest advances in close-quarters weapon systems.

Designed specifically for the heavier 7.62x35mm cartridge, the HVK-30 compromises range in favor of stopping power, and built-in recoil compensation systems afford the HVK-30 an impressive controllable rate of fire for its class.

While round ballistics limit performance at greater distances, they do allow the rifle to run very quietly with an attached silencer. This makes the weapon a natural choice for any operator who must be both fast and discreet, and ensure their opposition is "lights out" without a second thought."

The HVK-30 is unlocked at level 2. It is a high fire rate assault rifle with moderate recoil, low damage, and tight hip fire spread. It has the second highest overall fire rate of the Assault Rifles, and is only matched or bested by the SMGs, the Dingo, the RK5, and the FFAR. It deals a low 30 to 22 damage, tied with the M8A7 for the lowest damage assault rifle.

While it has low damage, its range is very good. It will be a four hit kill up to 51 meters, and a five hit kill past that. The rifle's moderate, but easily controllable recoil, helps it retain its effectiveness and ease of use out to such ranges. Still, the Foregrip is an effective attachment to consider, if one wishes to make the HVK-30 even more deadly and easy to use at these longer ranges.

While the suppressor's range detriment is noticeable on the HVK-30, its low damage difference, high fire rate, and better performance than other assault rifles in close range makes the Suppressor a fairly good choice if the player wants to maintain stealth.

High Caliber can be useful if a player actively aims for the head or is attempting to complete headshot challenges.

Rapid Fire, although significantly weaker in Black Ops III compared to other games, is much more noticeable and effective on the HVK-30 because of its already high fire rate, pushing it up to 780 RPM.

The HVK-30's high fire rate and average damage profile may make Extended Mags or Fast Mags a worthy choice by increasing clip size and/or speeding up reloads. With either of these attachments the HVK-30 can sustain fire longer or get back in the fight faster and play to its aggressive, fast-firing nature.

Long Barrel is a questionable attachment for the HVK-30; it doubles the range of the weapon, as with most other weapons in class, but the 4 shot range is already very good, so it can be seen as overkill to push the HVK-30's 4 shot range out to over 100 meters, especially considering how rarely such gunfights occur. Using it in conjunction with the suppressor, however, can be useful, as it will keep the player from the radar while mitigating the severe range penalty of the suppressor.

The HVK-30 has similar hipfire spread to that of the SMGs when moving, which makes it very effective at close range and an excellent candidate for the Laser Sight. This attachment will cut its hipfire spread down by over 50%, which can help save time by allowing a player to get accurate fire on a target without the need to aim down sight. The Quickdraw and Stock attachments further bolster its already superb handling for a more aggressive rushing user.

It is very useful within a close range, where the higher fire rate and lower hip spread allow it to compete with other close range weaponry (such as shotguns and SMGs). However, the low recoil and tremendous range makes the HVK-30 very powerful at mid and long range as well. It also has a slightly faster than usual sprint out time, at 0.275 seconds instead of the regular 0.3 seconds. These characteristics make the HVK-30 a capable all-range assault rifle.

The HVK-30 appears in every Call of Duty: Black Ops III Zombies map, with the exception of Dead Ops Arcade 2: Cyber's Avengening. It can be found both on the wall and in the Mystery Box.

When upgraded via the Pack-a-Punch Machine, it becomes the High Velocity Kicker. It has increased damage, a higher magazine capacity, and more reserve ammo.

The HVK-30 in first person 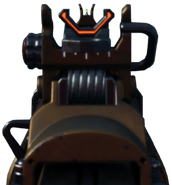 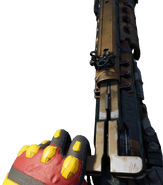 Chambering a round into the HVK-30

The HVK-30 returns in Call of Duty: Mobile. it was added during the Season 5 Steel Legion update.

The HVK-30 has high rate of fire, low recoil and low damage. Although its fire rate is very high for an assault rifle, it suffers from low damage output, therefore making it a very challenging gun to use. With Large Caliber Ammo mag, the gun receives a significant increase in damage with very little penalty in recoil and rate of fire. It also has very good hip fire accuracy, allowing it to be fairly flexible during close range combats.

The gun deals low damage even to enemies without armor, therefore making it a rather useless gun in Battle Royale if used without the Large Caliber Ammo mag. However, its low recoil and high rate of fire can bring about several benefits when fighting at mid range and long range. The gun is available as ground loot as a Rare blueprint, and can also be equipped when chosen as a customized blueprint inside Airdrops.

The HVK-30 in first person 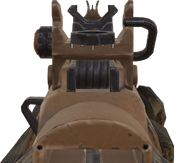