The HVR (referred to as UMP45 in the game files) is a Fujiwara ballistic submachine gun featured in Call of Duty: Infinite Warfare. It resembles a UMP45, except the stock is in its folded position, its body is blue-coloured and its muzzle has been fitted with what appears to be a large hand guard and rail system with a foregrip and integrated front iron sight and (unusable) laser sight module.

The HVR is one of the rarest weapons to find in the game, where it can only be obtained from killed enemies. What makes the HVR even rarer, however, is that it has no fixed spawn point(s) and since each soldier will have different weapons on each playthrough, this makes it very hard to obtain.

When all side missions are completed, the HVR unlocks the Dual Wield upgrade, which allows the player to dual wield HVRs.

The Dual Wield attachment appears in multiplayer as the Epic gun perk Twinsanity, which allows the player to dual-wiled the weapon and reduces the weapons' hip-fire spread and disables aiming-down-sights.

The HVR is unlocked at level 32. It is the last Submachine Gun to be unlocked in Multiplayer.

The iron sights of the HVR features an ammo counter that refers to the amount of ammunition in the current magazine on a panel underneath the reticle.

The HVR has an extremely small damage dropoff: there is only a five damage difference between the maximum and minimum damage, and both damage profiles allow for three-hit kills; however, to counterbalance the high damage, the HVR has the slowest rate of fire of all Submachine Guns, bar the MacTav-45. It also has the smallest magazine capacity of all SMGs, at just 26 rounds per magazine.

The HVR's biggest strengths are its high damage output alongside great accuracy and ammunition control. This makes the HVR a very deadly weapon, and is amongst one of the most powerful weapons in the game.

The HVR Gemini allows dual wielding the HVR, with the Gun Perk's icon and the look of the weapon extremely similar to the UMP45 with akimbo from Modern Warfare 2. While it struggles with long range, at close range the Gemini is a force to reckon with, due to its high stopping power ability along with high hip fire accuracy.

The HVR appears in Zombies in Spaceland and Rave in the Redwoods, and can be bought as a wall weapon for 1250 points. It has fairly high damage, and a middling fire rate which makes it perfect for prolonged fire without having to worry about wasting shots. The weapon's preferable fire rate makes Bang Bangs an unnecessary addition, as the weapon will simply spray away, increasing recoil and losing accuracy.

The HVR in first person 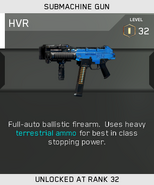 The HVR unlocked in multiplayer 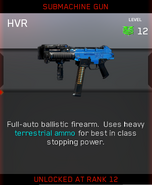 The HVR unlocked in Zombies

The HVR in its Akimbo mode

3D concept of the HVR.