MP-40, any weapon obtained by the player

"Halima Zambardi grew up with the finest things in life. But when that life was taken away, she discovered something richer than wine and gold. To Halima, freedom used to be doing as she pleased. But now, freedom means doing what is right."
— Carver Butcher

Halima Zambardi was born in 1922 in Mogadishu. Her mother was Somali while her father was an influential member of the Fascist party in Italy. During her childhood, her family moved back to Italy where they lived in luxury.

When her family returned to Somalia, Halima witnessed the brutality of the Fascist rule and the cruelty of colonialism. While her family fled to Italy, Halima joined the Somali Resistance and fought against the Italian occupation. 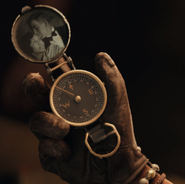 Halima's compass with a photo of her and her fiancé.

Halima as seen in Season One.

Halima as seen in Season Two.