Halloween Scream, officially Willard Wyler's Halloween Scream, is a special event that was live in Call of Duty: Infinite Warfare from October 9th, 2017 to November 1st, 2017[1][2][3] and Call of Duty: WWII. Similarly to Days of Summer, plenty of new items were released in the game, including new weapon variants, new supply drop content and new gamemodes in both Zombies and multiplayer. During the event, double XP, Weapon XP, Mission Team XP and Keys were able to be utilized for set times during the duration of the event.

A new gamemode for Zombies called Boss Battle was released that allowed players to fight the respective bosses of each Zombies map, starting chronologically with Zombies in Spaceland. Players are able to fight the Alien, Super Slasher, Rat King, Radioactive Thing and Mephistopheles. Players will need to own the respective DLC packs to play the respective maps.

When the player starts a map with Boss Battles ready, the player will spawn in the Afterlife Arcade. They will have a total of three minutes to pick up any weapon available on the wall of weapons and any perks with the 20,000 point balance. Depending on each weapon depends on its price, ranging from 2,500 points to 5,000 points. Once the player is ready, they can interact with the door used to return the player to the map or wait for the timer to run out. Once it is out or the player goes through the door, they will be brought to the boss fight of the respective map.

Inside the boss fight, there is a timer on the top left of the screen. This indicates how long the player is in the boss fight. The timer will stop once the whole boss fight is complete and the boss has finished their death animation. The game will automatic end and return the player back to the pre-lobby menu and be rewarded with a certain amount of XP and Keys. The fastest time the player achieves in completing a boss fight will be updated to the player's barracks on the map records. 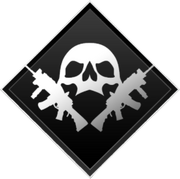 As well as purchasable supply drops, players were also awarded a free Halloween Scream supply drop every Wednesday and Friday, amounting up to 8 free drops over the course of the event. These drops only contained one single item and was also dupe protected. Players who earn all Halloween Scream items for a particular week will instead earn keys or Salvage as placeholders for the drop.

A total of six camouflages, six weapon variants, one emblem, four calling cards, two accessories, and four Combat Rig skins were added to the game, available for a limited time and through the Halloween Scream supply drops. Each week had a unique rotation of items. 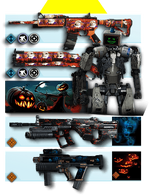 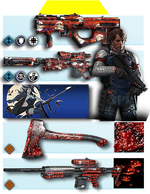 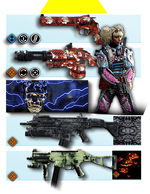 Promotional image for N31L, unlocked on week 1 of the event.

In-game promotion for the Week #1 items.

In-game promotion for the Week #2 items.

In-game promotion for the Week #3 items. 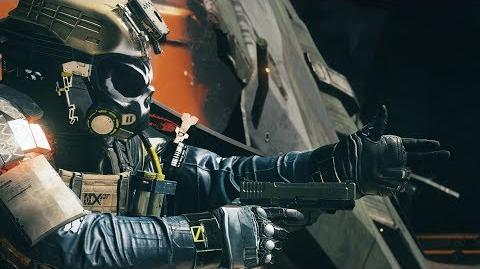