Handguns (which include pistols and revolvers, and are also referred to as side arms) are a type of secondary weapon in the Call of Duty series. Handguns usually have moderate stopping power and are able to pull off many shots in quick succession. Lower caliber handguns usually have higher magazine capacities, while the higher caliber handguns are louder, have more recoil and a smaller magazine capacity. In general, semi-auto pistols are less powerful than revolvers.

Compared to other weapons, handguns can be drawn the fastest, and switching to a sidearm is always faster than reloading. When aiming down the sights they have the fastest ADS time, have no zoom, and they retain full "look/aim" movement speed when doing so. However, handguns have moderate damage (if it's a revolver) and sometimes low if it's a pistol with a magazine (such as the M1911) outside of their usually short ranges. The low magazine size and semi-automatic nature limits them to ADS outside of point-blank ranges. Since their hipfire spread tends to be relatively poor, the user will often find him/herself running out of ammunition should they attempt to kill an enemy without aiming. Additionally, players cannot simply "sweep" the crosshairs over an opponent while continuously holding down the trigger and expect a kill, as every shot must be fired manually. There are some exceptions to this though. Some post-WWII handguns, like Glock G18, have high rate of fire combined with high magazine capacity.

In original Call of Duty and Call of Duty: United Offensive, handguns have a dedicated slot, and can be drawn by pressing "3" on keyboard. However, from Call of Duty 2 onwards, this slot is removed so a handgun occupys 1 of the only 2 primary gun slots. This change makes pistols much less appealing to many, as carrying one means giving up a full-sized weapon. However, with a handgun in hand, a player may actually run much faster. This trait makes handguns especially advantageous in single-player campaign, in which running to the next cover unscratched would often save the hassle of dealing with respawning enemies. Combined with the aforementioned ability to draw quickly, they are still worth considering even for competitive online players.

Handguns are some of the most commonplace weapons in the Call of Duty series, with the M1911 appearing in more games than any other weapon featured in Call of Duty.

List of Handguns in the Call of Duty Series

M9 (Campaign and Spec Ops only)

M1 Irons (Categorized as a Special; added via update)

Annihilator (classed as pistol in campaign, but specialist weapon in multiplayer)

Eraser (categorized as a heavy weapon)

Enfield No. 2 (Campaign, and later added to MP and Zombies in The Resistance second update)

KAP 45 (added with the Barbarians event)

Annihilator (categorized as a specialist weapon) 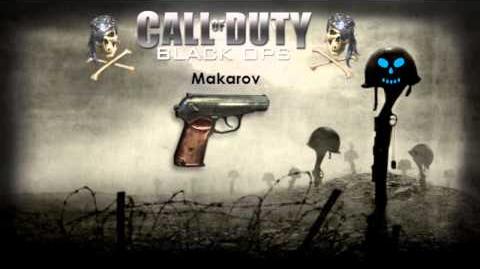