For the Call of Duty: Black Ops map, see Hangar 18.

Hangar is a multiplayer map in Call of Duty: World at War. It is a medium-sized map, and is quite open. It is comparable in size, placement, hiding, and sniping ability to Vacant in Call of Duty 4: Modern Warfare. As the name suggests, the map features an aircraft hangar in disrepair.

The hangar: The interior of the hangar is the area where most of the fighting takes place. If a player can snipe the walkway efficiently, do it, although only an experienced sniper can do this well. The best place to snipe would be in the remains of the fighter planes since they offer good cover. Remember, wood can be shot through relatively easy.

Hangar walkway: This area is small, but large battles take place here. If walking from one room to another, watch the nearby hut from a distance. Players are known to hide in the Garrison hut's balcony from time to time, waiting until players enter their range. To avert this, throw smoke or flares or just simply run if the ambusher is inexperienced. Enemies tend to hide in the crevasses of the rooms.

Artillery field: This is where the U.S. Marine Raiders spawn. This area is the most deserted area in the map but it can also be a battle ground on the rare occasion. Though, this place should not be ignored due to the fact that this has several of the easy pathways around the map. If the area is deserted, then use it to gain an advantage.

Garrison hut: This hut has the holding cell. It is also the largest hut. It has two stories. 1st floor: Troop Quarters and B1 is the Holding cell. Some players camp out in spaces of this hut. An example would be, players hide in the windowless wash room of the Troop Quarters while others camp at the balcony, as said before. One thing is that there is an extra piece of hangar that the player can jump from and aim at the office room in the hangar from there.

Officer's quarters: This one story hut is where snipers and ambushers camp, as this is the high traffic corner of the map. If one is going into this hut, it is recommend to be wary of Betties. If camping, set the betties where an enemy could not see them from the outside, then quietly wait until prey obliviously wanders past.

Storage: This is the darkest hut on the map. This is a two story hut; the first floor is fuel storage and the second is the main storage. Though, in the Nintendo Wii version, everything changes, this is probably the most sought-after area and many snipers take this place to their advantage, but do not ever overlook here. If one is using a long-ranged weapon, then this is the place for them.

Communications hut: This is where the Japanese Imperial Army spawns. It is the least trafficked area of all. It does not have much effect to ambushing as it is rare for enemies to be inside. 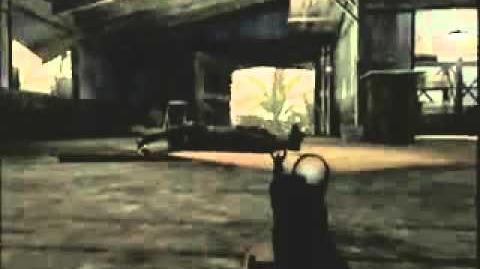 Retrieved from "https://callofduty.fandom.com/wiki/Hangar?oldid=2438390"
Community content is available under CC-BY-SA unless otherwise noted.