"Neutralise the Japanese defenses at the Peleliu airfield."
— Level description

"We're all numbed by Sullivan's death. We just never saw it coming. I still can't believe it. The most solid, dependable, and courageous Marine we've ever known... blink of an eye... gone. Now it's down to me. And me alone. To lead these men, my brothers... safely through this campaign. AA Fire from Peleliu Island is knocking our planes right out of the sky. Taking this airfield is our only priority... whatever the cost."
— Roebuck, in the opening

"Hard Landing" is the third campaign mission in the American campaign of Call of Duty: World at War.

At the start of the mission, Miller is treading through a swamp, in order to out-flank most of the Japanese defense. They come across a downed F4U Corsair, which a group of Marines are examining and trying to remove the dead pilot from the plane. However, the pilot is wired with a booby trap and explodes, signaling a Japanese ambush consisting of well camouflaged Banzai Chargers. After dispersing yet more enemies, Miller and the squad is out of the swamp and is faced with trenches and turrets. After clearing these out, there is yet another machine gun nest.

A Marine with a M2 Flamethrower runs up and goes prone behind an earth mound, when he gets up, he is shot and Miller is told to retrieve the flamethrower. He then proceeds to burn the pillbox and the group of Marines then moves down a road, and is faced with a large Japanese stronghold. Miller is then told to pick up an M1 Garand attached with a rifle grenade. After clearing out the building, Miller and the Marines proceeds to help out some tanks that are trying to enter an enemy airfield.

After covering the tanks, he must clear out the main building and nearby trenches. Once he kills the soldiers manning anti-aircraft guns, a whole load of enemy reinforcements arrive. As soon as a tank threatens them, Miller is told to man an AA gun and destroy it. When it is destroyed, the mission ends. 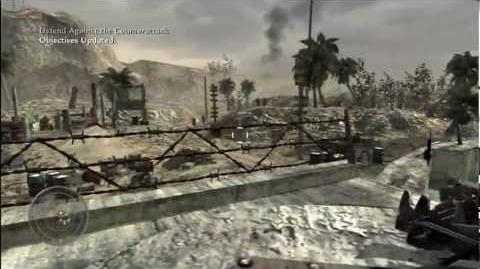 A banzai charger rushes the Marines.

Roebuck with his BAR.

A Marine with his bazooka.

Friendly tanks on the airfield.

Marines in the beginning of the level.

The death card is located in the Japanese stronghold. It is in the room that contains the stairs to the first floor, it is next to a dead soldier and support pillar.