For the perk with similar Pro effects, see Assassin.

Hard Wired appears as a perk in the Perk 2 slot in Call of Duty: Black Ops II multiplayer, available at level 26. Similar to Assassin Pro in Call of Duty: Modern Warfare 3, it renders the player completely immune to enemy Counter-UAVs and any EMP effects.

Hard Wired is a suitable choice for players that use excessive EMP Grenades, in a similar fashion to using Tactical Mask with Flashbangs and Concussion Grenades—though Tactical Mask does not make the player completely immune to Flashbangs and Concussion Grenades, unlike Hard Wired which makes the player completely immune to EMP grenades—to prevent players from stunning themselves. The EMP effect to the player is completely absent: the player's HUD and electronics remain unaffected, while still destroying nearby enemy equipment and disabling enemies' HUDs effectively—unless they, too, have the perk.

It is worth noting that Hard Wired allows the player to call in scorestreaks when an enemy's EMP is active; however, Hard Wired will not protect the player's equipment or scorestreak rewards from the EMP detonation, nor from incoming EMP grenades.

Hard Wired returns in Call of Duty: Black Ops: Declassified. It simply counters the Counter-Spy plane because there is no EMP in the game.

Hard Wired returns once again in Call of Duty: Advanced Warfare. This perk prevents the player's HUD from going fuzzy and allows the player to maintain their Exo abilities after an enemy System Hack. Any equipment/Scorestreaks that were active before an enemy System Hack was called in will still be destroyed if the system hack had the Disable Equipment/Disable Streaks module equipped respectively.

Running this perk with other stealth perks like Blast Suppressor, Blind Eye, Cold-Blooded and Low Profile can maximize its use as the player is immune to most detection.

As the only source of Nano Swarms so far is a module of the Missile Strike, many do not have to worry about it. However, if there is a Nano Swarm (a bubble of red or blue depending on team), players can walk straight through without taking damage if they have this perk.

An update was added that now prevents users to flinch when hit by tactical grenades, such as EMP or Stun grenades.

Hard Wired returns in Call of Duty: Black Ops III as a Tier 2 perk. Like in previous installments, it grants the player immunity from disruptive enemy scorestreaks and equipment (Counter-UAV, Power Core, EMP Grenade and Smoke Screen), as well as giving it a stealth role by allowing the player to walk past Trip Mines, Shock Charges and C4 without setting them off, as well as making the player harder to see via Sixth Sense and Tracker.

"Immune to EMP effects, blocks equipment or abilities that outline you for enemies."
— Create-A-Class Description.

Hard Wired returns in Call of Duty: Infinite Warfare. It lets the user be immune to EMP effects, blocks equipment or abilities that outline the user for enemies. It is unlocked by default. 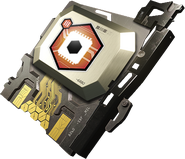 Hard Wired returns in Call of Duty: Mobile as a Tier 2 perk.

It makes become immune to Counter-UAV and EMP Grenade, and no longer trigger the Trip Mine. The enemy Tracker perk are also reduced.