In 1966, Stone enlisted to the Yorkshire Regiment. Four years later, he qualified for the Special Air Service and was put into the 22nd SAS Regiment. In 1973, he was transferred to the Special Projects Team.

In 1975, Stone was dishonorably discharged from the SAS, likely due to something that he had done the year prior. He would later become a mercenary and was spotted training pro-communist groups in Africa and the Middle East. 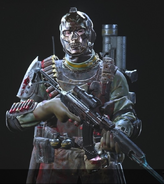