The Head Cutter is a wonder weapon that appears in the Call of Duty: Infinite Warfare Zombies map, Zombies in Spaceland.

The Head Cutter, like all quest weapons, is a buildable weapon consisting of 3 components: a souvenir trophy, a battery, and an elemental crystal. All four quest weapons require the, Golden Teeth to be purchased from the Astrocade reward counter for 300 tickets, a Brute to break the teeth on the alligator trap in the Kepler System section of the map, and the broken teeth to be replaced with the gold teeth to reveal a cabinet which contains all the crystals.

Once all three parts have been collected, they need to be placed in the cardboard cutout next to the Polar Peak teleporter. Each piece will need to be added separately. Once all three have been added, the Head Cutter can be obtained from the cutout. The weapon will cause a zombie to stop in its tracks when hit and its head to explode, causing splash damage to all zombies around it.

When upgraded via Pack-a-Punch Machine after the Alien Fuses have been installed, it becomes the Guillotine.

The Head Cutter in first-person. 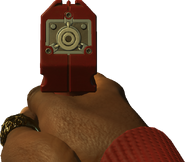 Aiming down the Head Cutter's sights. 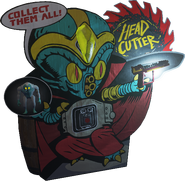 The Yeti Toy used to craft the Head Cutter.

The Battery used to craft the Head Cutter.