Regroup with your squad.
Advance through the buildings.
Storm the Plaza.
Destroy the FlaK 88s (x4).
Enter the Reichstag.

"Which do you think will lead us home? Writing about this war, or fighting it? No one will ever read this! If you lack the stomach to kill for your country, at least show me that you are willing to die for it."
— Sgt. Reznov after saving Dimitri Petrenko, when he sees Chernov writing and reading in his diary.

"Heart of the Reich" is the fourteenth and penultimate mission in Call of Duty: World at War.

The almost drowned Dimitri is dragged out from the metro by Reznov, who ashames Chernov for working on his diary instead of fighting, then orders the latter to carry the Red Army flag.  Dimitri's unit is assigned to attack from the left flank. They fight through a ruined building and a library, then regroup with Reznov in a tunnel before the assault on the square. Flak 88s guarding the square halt the advance of Soviet tanks, so Dimitri must destory all 4 Flaks to clear a path for the advancing Soviet troops.

In the final push toward the main entrance of the Reichstag "the Heart of the Reich", Chernov takes the lead, but is fatally burnt by a Nazi armed with a flamethrower. Unable to save him, Reznov comforts his dying friend and takes his diary. Leaded by Reznov, Soviet troops storm into the Reichstag. 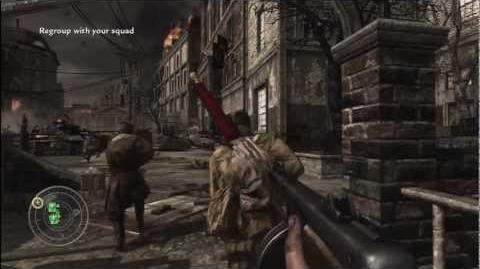 Call of Duty World at War - Campaign - Heart of the Reich

Sgt. Reznov talking to Chernov at the beginning of the level.

The soldier who carried the flag, only to be killed when reaching the Reichstag and the flag being picked up by Dimitri Petrenko.

) - Complete "Heart of the Reich" on Veteran.

Main article: Heart of the Reich/Transcript