Obtain new orders from Captain Price.
Take up a defensive position along the ridgeline.
Defend the southern hill approach.
Fall back and defend the southwestern approaches.
Use the detonators in the tavern to delay the enemy attack.
Fall back to the farm to the north.
Get the Javelin in the barn.
Destroy the incoming tanks.
Survive until the helicopter arrives.
Get to the LZ.
Board the helicopter.

"Al-Asad's dead, but don't go patting yourself on the back just yet. The Ultranationalists are closing in on our position in the village and we have to hold out while waiting for extraction. Perfect. Let's make them feel welcome."
— Call of Duty: Modern Warfare Remastered level description

Captain Price: "Every Ultranationalist psycho in Zakhaev's pocket is about to show up on our doorstep, coming to claim Al-Asad."
Gaz: "Or what's left of him."
— Captain Price and Gaz

"Heat" is the fifteenth campaign mission of Call of Duty 4: Modern Warfare and Call of Duty: Modern Warfare Remastered. It is the penultimate mission of Act 2. In gameplay, it's both a redux and a reversal of Safehouse, while in story it is the SAS team's fight to survive against Imran Zakhaev's supporters after the capture (and execution) of Khaled Al-Asad.

The level starts off with Captain Price, Soap (once again controlled by the player), Gaz, and Arem charging down to defend the hill, with Mac providing machine gun covering fire.

The original plan is to deploy charges (antipersonnel explosives) at "Phase Line Alpha" near a church, and "Phase Line Bravo" near a tavern, then to hold out until extraction at a landing zone (LZ) at the top of the hill. However, after the simultaneous detonations at Alpha, the enemy (mistaking the S.A.S. team for a much larger force) eventually resort to the mortars to force them back. MacTavish then mans a Minigun inside a crashed Black Hawk helicopter, holding off the enemy until enemy helicopters start deploying troops. Once Soap and the rest of the S.A.S. soldiers reach Phase Line Bravo, he has to use four detonators (one in each of the four windows of the second floor) in the tavern to manually detonate the Bravo charges. They retreat up the hill once more to the barn near the village, after which the team holds off the enemy and allow Soap to use a Javelin missile system to take out four enemy T-72 tanks.

However, despite the clearing of enemy armor the evacuation helicopter pilot deems the LZ "too hot", with multiple SAM launchers across the mountains, and the team is told to go for the LZ they used the night prior (at the lakeside gas station) within four minutes or be left behind. Despite Gaz's anger at having to go back down the same hill just ceded to the enemy, Soap takes point and leads the team down the hill. SSgt. Griggs and his fellow Marines cover the S.A.S. as they board the helicopter. All are successfully evacuated, except for Mac who is presumed to have died providing fire support for the squad. 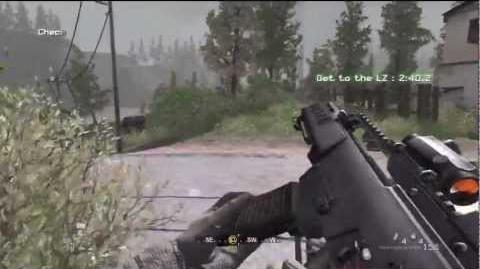 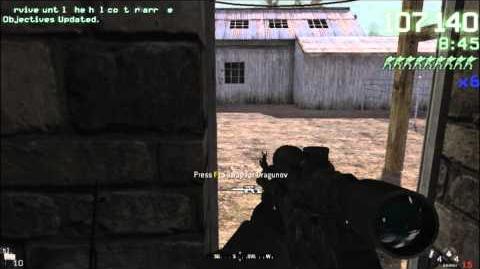 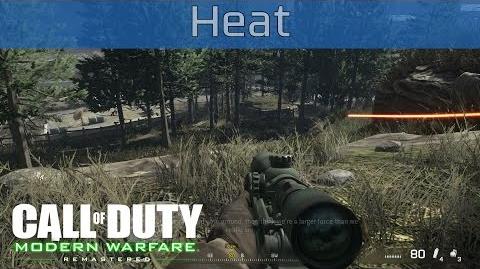 A T-72 with an unusual camouflage, only seen in "Heat".