Robert Bowling also stated it was originally to be a level 4 upgrade for the Juggernaut perk in multiplayer, however this was replaced by Pro versions of perks.[1] 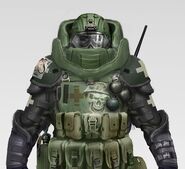 Front and back concept art.

Cut kill icon for it. Was used in Special Ops and Modern Warfare 3's multiplayer.
Add a photo to this gallery

Retrieved from "https://callofduty.fandom.com/wiki/Heavy_Armor?oldid=2262178"
Community content is available under CC-BY-SA unless otherwise noted.