"Watching your son flail as he drowned under my boot gave me the greatest pleasure of all."
— Heinrich to Rousseau in Liberation.

SS-und Polizeiführer Heinrich was the secondary antagonist in Call of Duty: WWII. He was the SS Police Leader of France and an officer within the Nazi Party. He has been endlessly pursuing Camille "Rousseau" Denis and focusing on destroying the French Resistance. He is responsible for the death of Rousseau's family.

"Heinrich was the middle child in a wealthy and highly cultured family. His father was a composer and opera singer; his mother was a skilled cellist. He suffered from polio as a small boy and was taunted by his schoolmates for his limp. Even worse, his mother believed that for him to overcome his disability, he would need toughness and constant rehabilitation instead of coddling and love. Although he recovered, the scars of her verbal and physical abuse never healed. Instead, they manifested as a ruthless drive to succeed at any cost and a lack of empathy for others. Aside from experiencing taunts and abuse for his physical ailments, schoolmates attacked him over rumours that his grandmother was Jewish. These attacks, combined with the anti-Semitism of his Protestant parents, led him to a deep contempt for the Jews. He first acted on this hatred after joining the Freikorps as a young man. This early taste of organized violence served him well when he joined the army after his family fell into destitution following Germany's defeat in World War I. Never one to give up, Heinrich schemed his way through the ranks, but still suffered taunts for his elite, cultured mannerisms, and his love of music. After rising to the rank of 2nd Lieutenant, Heinrich joined the Nazi Party and, in short order, his cold, calculating brutality and strong organization skills brought him to the attention of Himmler, who hired him to create what would become the SS Intelligence Service. After suffering a scandal, Heinrich was transferred to Paris where he thrived. Developing files on the resistance, very little can happen in France without him knowing about it." - Call of Duty WWII Official Strategy Guide entry

He eventually finds Rousseau in his office, disguised as a Nazi official. When she tells him that she is here to deliver travel documents, Heinrich figures out that the official is actually Rousseau and he decides to gloats about killing her family. Heinrich then tackles Rousseau and attempts to kill her. However she grabs the broken wine glass and stabs him in the right side twice and one on the neck, killing him. 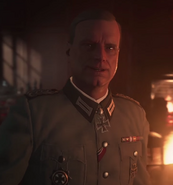 Heinrich telling Rousseau that him killing her son gave him pleasure.