For the character with the same first name, see Heinrich.

"The mudak in the car is General Heinrich Amsel, architect of Stalingrad's misery."
— Sgt. Reznov

Major General Heinrich Amsel was a German officer in the Wehrmacht who was mainly responsible for the massacre of the Red Army soldiers and civilians across the Soviet Union during World War II. His model is shared with Edward Richtofen.

Major General Heinrich Amsel served as the commander of a German unit based in the area of Red Square in Stalingrad. Given his rank, he was most likely a divisional commander and given the area that his command building was located.

During the German occupation of Stalingrad, Amsel gained infamy for orchestrating brutal massacres against Soviet soldiers and civilians. His role in the occupation led to Sergeant Reznov spending days relentlessly stalking Amsel. It was not until September 17, 1942, after a massacre of soldiers from the 62nd Rifle Division took place, that Reznov enlisted the aid of Private Petrenko in helping him track down and assassinate Amsel.

Initially, Amsel treated the day as any other day - he went about his daily agenda of inspecting the men under his command, but it was not until Red Army soldiers made a push to his headquarters that alerted Amsel enough to cause him to attempt to withdraw to another location. Together with his personal bodyguards, Amsel tried to slip out of his headquarters unnoticed, but during his attempt, he was assassinated by Petrenko. 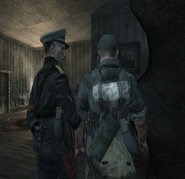 Amsel talking to a soldier.

Amsel seen in intro of level.

Amsel model.
Add a photo to this gallery

Amsel was an arrogant, cruel, and warlike man. He is described by Reznov as the "architect of Stalingrad's misery". At the end of his life he turns and runs with a small armed escort in tow. His escort is cut down by the Soviets and Dimitri kills him.

) - Assassinate General Amsel with a pistol shot. (Solo only)

Retrieved from "https://callofduty.fandom.com/wiki/Heinrich_Amsel?oldid=2557770"
Community content is available under CC-BY-SA unless otherwise noted.