For the character from Call of Duty: Mobile, see Park (Mobile).

M67 Grenade, Flashbang, any equipment obtained by the player

"While studying as a young prodigy at Oxford, Park lost her brother to a terrorist attack. With new focus she joined MI6, and quickly became one of their leading experts on international paramilitary organizations."
— In-game biography

Helen Park entered Oxford at the age of 16 where she pursued a doctorate in international relations. After her older brother was killed in an IRA car bomb attack in London, she dropped out from the program and began studying the origins and motivations of international para-military organizations, eventually leading her to join the ranks of MI6.[1] Park earned her place by proving her prowess as an expert strategist, becoming one of MI6's youngest yet most talented logistics agent. She also displayed proficiency in chemistry, biology, psychological manipulation, and is a talented hypnotist.

After several years of international assignments, Park was placed on protection service for two British scientists who were set to travel to a clandestine location to collaborate with the CIA on an officially sponsored project. During this assignment, she met Russell Adler, a key figure in the new program, and personally took on an expanded role in its development.[1]

During her career, Park worked with a fellow MI6 agent codenamed "Madam Shell" for three years, who she suspected had become a rogue double agent. Once Madam Shell realized Park's suspicions, she attempted to kill her, and left a scar across her neck as a parting gift. After the incident, Park kept a scarf around her to neck to hide the scar, and blamed herself for being naïve at the time. Unbeknownst to her at the time, Mossad fixer Eleazar "Lazar" Azoulay would track down Madam Shell and kill her by decapitation, as retaliation for the scar she gave Park.

In 1981, Park is recruited into joining Russell Adler's team to stop the infamous spy Perseus, being recruited alongside Lazar, Lawrence Sims, Alex Mason, and Frank Woods. Adler, Mason and Woods captured one of Perseus' agents and failed to interrogate him by known means. In response, Park advised Adler to submit the subject to the MK Ultra program, where she used a combination of psychological torture, neuroactive chemicals and hypnosis to reprogram the subject's mind, implanting memories of them working with Adler and Sims during the Vietnam War, as well as a hypnotic phrase that triggered the memories' reproduction and pushed the subject to obey subsequent commands. The associate is given the code name "Bell" by Adler, and is brought on the team to help them stop Perseus and possibly learn of his location. At the CIA safehouse in West Berlin, Germany, the team realize they need leads on Perseus after the CIA and MI6 haven't got any. Adler has Bell recall the implanted memories of Operation Fracture Jaw, where they found intel on Perseus and Soviet activity in Vietnam, and protected a nuclear device.

With Bell decoding the intel, they get stuck on the name "Anton Volkov", who is an associate of Perseus and Russian mafia arms dealer who moved to East Berlin once the Berlin Wall was placed. Knowing that Volkov will be hard to get to, the team decide to follow his chief courier Franz Kraus, and have BND spy Greta Keller assist them on the mission. Park also informs Adler that she wants Volkov to be apprehended rather than eliminated, as MI6 had been tracking the arms dealer for several years. Park and Lazar separate from Adler and Bell, and stay stationed at a storefront near Kraus' apartment. During the operation, Keller informs Bell that her informant Lukas Richter was captured by the Stasi, who has also informed Kraus that he was possibly followed by spies. After learning of this information, Park and Lazar regroup and task Bell with placing a tracker in Kraus' briefcase, but they are captured after doing so. Park and the team rescue Bell and Greta (if alive), and Bell will corner Volkov when he attempts to escape. If Bell apprehends Volkov, Park will thank them on the behalf of MI6, but if Bell kills Volkov, she will express disappointment in not capturing the arms dealer.

Park would later give support during Woods and "Bell's" operation at the Zakarpatska Oblast, and learns from Woods that Jason Hudson is the head of a CIA nuclear program called Operation Greenlight. Hudson reveals that the CIA project was created as scorched earth policy if the Soviet Union invaded the United States, and that Perseus stole a nuke from Berlin. After Adler and the team confront Hudson, Mason and Woods are sent to Mount Yamantau to collect the mainframe of the sleeper agents Perseus is after. Though the mission was successful, Hudson's superior, Emerson Black reveals that Perseus wiped the mainframe, and that only way to get the names is from the KGB headquarters in Moscow. Hudson authorizes the mission for Adler, and Parks plays a part on the operation coordinating intel and exfil for Adler and Bell. With the assistance of double agent Dimitri Belikov, Adler and Bell succeed in getting the list of sleeper agents from the KGB's mainframe, and escape with Lazar.

After the operation, Adler and the team pin point Theodore Hastings as the sleeper agent Perseus will use to arm the stolen nuke in Havana, Cuba. Park works with Lazar and Bell on trying to stop Hastings, but watch on camera Perseus shoot Hastings and his staff to tie up loose ends. Park and Bell manage to get to Hastings before he dies, and he informs them that Perseus had him arm all of the American nukes across Europe, which he will detonate and incriminate the United States. While trying to escape from the compound, Park, Lazar, and Bell are critically injured by an RPG explosion, and the player has to either save Park, Lazar, or neither.

If the player saves Park, she will thank them at the CIA safehouse, and asks them to help Adler and Sims learn the location of Perseus. Adler then forces Bell to recall the implanted memories with the intracerebral injection of a neuroactive drug that Park had used to brainwash Bell, though she warns him that injecting into the brain could cause seizures. Bell manages to recall their past memory with Perseus revealing his plans and of his location, though they also discover the truth behind their identity, and recall undergoing the MK Ultra procedures, much to their shock. Park informs Bell of her and Adler's intentions behind programming them, justifying it by being necessary to prevent Perseus from igniting a nuclear catastrophe. The player has the option to either tell the truth of Perseus's location, or lie and take them to the wrong location.

Helen Park appears in Call of Duty: Mobile and was added as part of the Season 13 Wint3r War Battle Pass. [2] 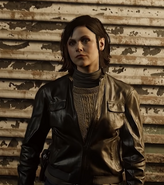 Park as an operator in Multiplayer.

Park as an operator in Warzone.