"Fetch me their souls!"
— The Demonic Announcer at the beginning of a Hellhound round.

Hellhounds are essentially zombie-dogs that are a mutated version of Samantha's pet, Fluffy. Fluffy was put in the Der Riese mainframe teleporter and turned into a deadly Hellhound. She later had puppies, accounting for the rest of the Hellhounds. Hellhounds resemble badly deformed German Shepherds. They randomly spawn throughout the map (a ball of lightning will usually indicate whenever they spawn) in packs of two to four (depending on the amount of players) every four to five rounds and their sole objective is to kill the player by attacking with their teeth and claws or by exploding after death. The ground shakes whenever they spawn and there will be a heavy fog covering the map. There are two variants of the Hellhound: the flaming Hellhound, which on top of being perpetually on fire will explode on death, and the normal Hellhound, that simply falls to the ground and will not explode when killed. When the last Hellhound in their special round is killed, it will always drop a Max Ammo power-up. One exception to this is Shi No Numa, where the Max Ammo may not be dropped by the Hellhound, but the next zombie the player kills. The electric bolts that appear during a Hellhound round are supposedly linked towards the teleporter incident that occurred at the Der Riese facility.

Hellhounds make a return in Firebase Z as the Flaming variant. They begin spawning during the later rounds, or whenever the truth serum is created. However, unlike the previous installments where Flaming Hellhounds only explode when killed, their only attack in this game is to get close to the player and explode. Upon their detonation, they leave behind a pool of flames similar to a Molotov Cocktail, which can injure both players and zombies alike. As such, it is advisable to maintain distance from the Hellhounds when killing them. Hellhounds also make an appearance in the Outbreak mode, roaming aimlessly throughout the map.

In Der Riese, there are a series of radios that depicts the Hellhound's creation. Dr. Maxis and his assistant, Edward Richtofen, were doing tests at the Der Riese facility. One of the tests involved Samantha's dog, Fluffy, which was pregnant. When teleported, Fluffy vanished and later reappeared as a demonic variant of Samantha's dog; Fluffy became a Hellhound.

When this occurred, Richtofen followed through with his plot to get rid of the Maxis' by locking them in the teleportation laboratory with the possessed Fluffy and sending them through to the Aether. Dr. Maxis was teleported to The Crazy Place, while Samantha was sent to Griffin Station. It is unknown where Fluffy ended up, however it is believed that Fluffy then gave birth to the Hellhounds.

The Hellhound was the first boss to be featured in the game's battle royale mode. The Hellhound (also known as the "Zombie Dog") was this time a large entity similar to the Cerberus. Just like any other boss encountered in this game mode, it has a large health pool and can deal massive damage. Defeating the boss results in it dropping high-tier loot as rewards for killing it.

The Hellhound boss was later replaced with The Butcher boss.

A Hellhound is used as a Finishing Move for both Call of Duty: Modern Warfare and Call of Duty: Warzone obtained from the "Undead Forces" bundle released in Season Six.

The Hellhound's size in CoD WaW.

The Hellhound as it appears in Call of Duty: Black Ops (Nintendo DS). 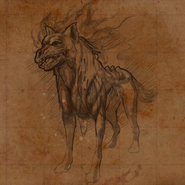 A drawing of a Hellhound as seen in the Zombies Chronicles timeline poster. 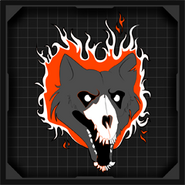 A Hellhound, as seen on the icon for the achievement Fetch. 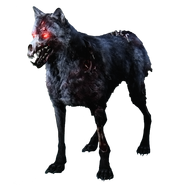 The icon used for the Hellhound finishing move in Call of Duty: Modern Warfare. 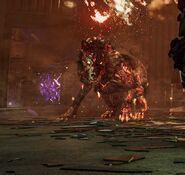 A Hellhound as seen in Call of Duty: Black Ops Cold War.