Call of Duty Wiki
Register
Don't have an account?
Sign In
Advertisement
in: Call of Duty: Black Ops 4 Launchers

The Hellion Salvo is a launcher featured in Call of Duty: Black Ops 4.

The Hellion Salvo is a rocket launcher primarily geared towards anti-vehicle play. It can carry up to 4 total rockets (1 in the launcher and 3 in reserve). Its effectiveness as an antipersonnel weapon is limited by low damage, and should not be used against infantry except as a last resort.

The Hellion Salvo appears in the zombie maps Voyage of Despair, IX, Blood of the Dead, and Classified, where it's available as a weapon within the Mystery Box for 950 points. When upgraded via Pack-a-Punch Machine, it becomes the Zitro's Orbital Arbalest with the magazine size increased to 4 rockets and its ammo reserve increased to 36. It usually kills heavy zombies, such as "Gladiators" in one shot when upgraded, and it kills Blight Fathers at a minimum of 3 well placed rockets to it's weak points. When upgraded, it deals massive amounts of damage, killing zombies in one shot at very high rounds. Unknown if this weapon deals infinite damage to normal and heavy zombies. 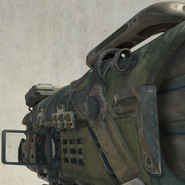 The Hellion Salvo in first person

Concept art by Will Huang.