Level 24
The Hellstorm Missile requires a scorestreak of 700. It is similar to the Predator Missile from the Modern Warfare series, with the exception that the player can choose to either shoot a cluster of bombs, or use a single missile by not pressing the firing button, essentially making it perform like said killstreak.

Although not very well known, the Hellstorm missile can be shot down and destroyed with a single well placed shot shot of any light arms that is, before the cluster bombs are deployed. Anti-Aircraft missiles and the Black Hat will be unable to damage it, lock on to it or destroy it however, even before the cluster bombs are deployed. [2]The Trophy System will automatically destroy all heavy projectiles including the Hellstorm missile itself, as it was designed to do with the exception of its cluster bombs.

This Scorestreak is not recommended for use in Hardcore modes, as it is very easy to accidentally kill teammates, particularly if the cluster bomb is used.

Hellstorm missile above Standoff.
Add a photo to this gallery

The Hellstorm missile returns as a scorestreak featured in Black Ops III. This time it requires 800 points to acquire.

The decoys deployed by enemy Reaper will be shown as normal targets, this means the one who is controlling the missile can be fooled by the clones.

It is possible to lock on and destroy a Hellstorm missile with a rocket launcher if it has not split yet. 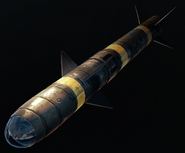 The Hellstorm missile returns in Black Ops 4 as a scorestreak. Its price is increased to 850 points, equipping COMSEC Device will reduce it to 700 points.

The missile still can launch multiple cluster bombs to destroy the enemies. Unlike in previous games, this time the missile can be used as a Predator Missile after launching the cluster bombs. In other words, the Hellstorm missile in Black Ops 4 acts as an enhanced version of the Trinity Rocket in Ghosts and Infinite Warfare.

The missile can be slowed down or boosted all the time. It is also possible to lock on and destroy a missile with a rocket launcher if it hasn't split yet.

The Hellstorm missile is deployed from some kind of UAV, being internally carried. Similar to the Glide Bomb in WWII, an animation will show the missile being deployed from the aircraft before players can control the missile. Unlike in previous games that players take the control of the missile immediately when it is deployed.

Hellstorm Missile UAV. A missile has been deployed and the internal store is open.
Add a photo to this gallery

Retrieved from "https://callofduty.fandom.com/wiki/Hellstorm_Missile?oldid=2553127"
Community content is available under CC-BY-SA unless otherwise noted.