Call of Duty Wiki
Register
Don't have an account?
Sign In
Advertisement
in: Call of Duty: Mobile Characters, Antagonists

MW11, Katana, and any weapon obtained by the player

C4, and any equipment obtained by the player

"The only definitive intel on Hidora Kai includes his strong connections to dangerous people, his deep pockets, and his place as one of the heads of the Five Knights. Hidora embodies what it means to fear the unknown."
— In-game biography

Hidora Kai is a character featured in Call of Duty: Mobile and was added in the game on October 20, 2020, during Season 11 Anniversary as part of Halloween Draw Redux. [2] Hidora Kai is also an important character in the Comics, where he is an antagonist.

Hidora first appears in the Season 11 Anniversary comics. Revealed to be an underground criminal magnate, he is shown to be meeting up with a disguised Mace in Alcatraz. The pair starts to plan out their next moves, disabling all electronic devices in the world, including military radio towers, communication centers, Mara and Soap's convoy and even the plane Ghost and Tank were flying in, using the EMP launched earlier. The operators survive the attack and they all rendezvous at The Club.

Later on, he appears again in Alcatraz, this time the place being stormed by Mara and her team. He then engages Mara in a brawl while her team finds the command center rigged to blow. During their fight, Hidora loses the laptop to Mara, but barely manages to escape when the explosives go off and the building starts falling apart. In the aftermath, Hidora is shown to have escaped on a boat.

Hidora is also listed to be a member of the Five Knights, according to Makarov, he is the one looking for corporate benefits.

Later on, he is revealed to have returned to Tokyo to rebuild the Five Knights, according to Menendez who divulged the information under interrogation by Captain Price and Shepherd.

Like Templar, Hidora rarely (if at all) uses any kind of firearms and seems to prefer his signature katana as his method of offense. He is also a great swordsman, being able to fight Mara only with his katana.

While in Tokyo, Hidora is ambushed by Alex and Soap, and orders his henchmen to get rid of them while he escapes. However, he is intercepted by the pair before he can do so, and is knocked out and carried away by them while his henchmen relentlessly pursue them. But before they can escape, an individual resembling Spectre intercepts them, allowing Hidora to recover and attempt to escape once more. He doesn't manage to get far though, as Soap knocks him out again with a stolen motorcycle. Alex then tells him to get to the exfiltration site.

Hidora is then later apprehended as Alex and Soap both carry him over to a boat on the docks. His henchmen fall short of reaching him and are forced to remain behind.

He is later interrogated by Shepherd aboard, but refuses to divulge anything, aside from the fact that he doesn't know what they expect and that he won't be sitting long. The trio dismiss the idea that there's someone following them, until the alarm goes off, proving Hidora wasn't mistaken about his intuition; Vagr Modir and her team of mercenaries attack the ship that he's being held in. Modir manages to get past both Alex and Soap, and busts into the cabin where Hidora is being held, only to find that the Jap is held at gunpoint by Shepherd.

Hidora is subsequently freed by Modir and he most likely tied up Shepherd to prevent them from escaping. As he and Modir heads outside, he suggests contacting Rorke, but Modir notes that he’s busy and they will coordinate with him shortly. Hidora expresses worry as he watches Modir’s fleet being decimated by the Ghosts fleet, but Modir tells him to keep moving. He says that the Ghosts have found them, but Modir is confident that they won’t be stopped as the pair escapes on a speedboat.

Hidora and Modir then rendezvous with Rorke on another ship. Modir chides Rorke for giving her flawed intel, but he notes that Adler introduced a new element and that he was playing his cards close to his chest. Just then, their ship comes under fire from both the UAC & Ghosts ships. Modir suggests for them to drop naval mines to lose them, which succeeds in delaying them long enough to make their getaway.

Later, Rorke’s ship is revealed to have arrived in Panama. Hidora questions him, but Rorke tells him that he’s not here to answer his questions and reminds him who freed him from the UAC. Hidora accepts and expresses concern over the fact that the UAC is coming. Rorke isn’t worried however, as he replies that letting them come is not a problem as they won’t find the place as friendly as they do.

Hidora won’t be seen again until the UAC’s mission into Blackout. This time however, they’re not planning to capture him, instead to take him out on sight. Several of the Five Knights’ henchmen are killed in the UAC’s attempt to get to Hidora. He’s eventually shown to be hiding out in a deeper section of the facility that Price and his team raided.

He then taunts Price on whether he’s going to finish it or quip, to which he responds that he’s happy to oblige. Forced to retreat, Hidora then shoots Demir, wounding him on the shoulder. Rosa then lunges at him, kicking away his gun, but Hidora is quick enough to draw his sword and slashes her on her left cheek, remarking she’s not like any other woman. He then runs off, stating they’re all dead anyway.

Pursued by an infuriated Price, he then uses his sword to slice his gun in half, but then gets stunned & disarmed of his sword, before being fatally stabbed by the latter. However, Hidora mocks him for thinking he has won, saying that everything is “going dark” as Price had said. Having had enough, Price then slashes Hidora through his torso, killing him. 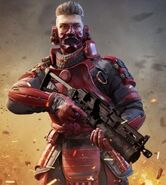 Hidora Kai with The Boss uniform.

Hidora Kai in the Comics.

Hidora Kai escapes in a boat.