It returns in Call of Duty: Black Ops 4 in the Blackout mode.

Hijacked is also available in Call of Duty: Black Ops Cold War, where it was added as part of Season Four content for the game.

The map is set on a large hijacked superyacht. The sharp corners and confined spaces promote close-quarters combat. There is also a large container bay at the bottom of the map. Also, there are two zodiacs at the end of the pool side.

The map has two main structures, each a two-story "building." In the middle of these two buildings there is a small open area with a shower area in the middle. On the second story of both buildings are windows which can be fired from, and have open views into the small structure on the port side of the ship and the centre courtyard. The views however are obstructed by the small shower area in the middle, providing cover from raised attackers. At the bow and stern of the ship, there are also more open areas, with the stern of the ship being the most open area of the map. The walkways down either side of the ship leading to the port, stern and centre courtyard mean that it is possible to use longer-ranged weapons in this map even if the general map layout promotes close-quarters combat. There is also an underground passage through out the engine room which is accesable via open hatches in both buildings. It is the easiest way to get to the opposite side of the map.

There is a small vent underneath the hot tub on the top deck that is open, allowing lethal equipment such as frag grenades to be thrown into the boiler room below deck. This can provide a great advantage in the gamemode Hardpoint, as the one of the hardpoints is set in the room. Conversely, grenades can also be thrown the opposite way.

A poster found throughout the campaign. It is named "Deeper" in game files, possibly an early name for the movie. 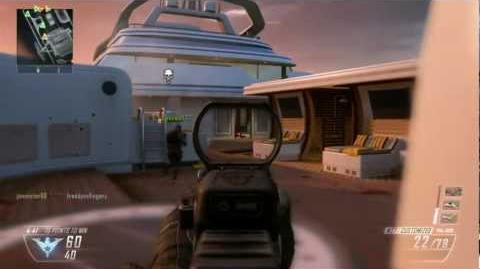 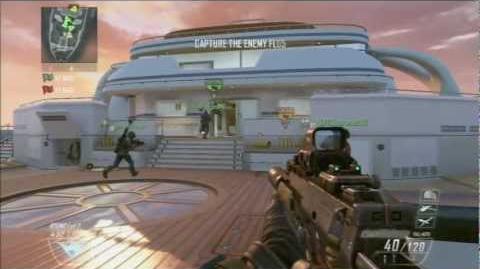