Get to the front lines.
Defend the beach from the Federation invasion. (Objective Failed)
Fight through the trenches to drone control.
Retreat!
Get to the command center and find your father.

"Homecoming" is the fifth campaign mission of Call of Duty: Ghosts. It involves defending Los Angeles from the Federation using A-10 Thunderbolt II drones.

The player assumes the role of Logan Walker. Fort Santa Monica has fallen under a full-scale invasion by the Federation. Riley is left with a soldier to be moved to the command center. Logan and his brother Hesh push back the enemy soldiers with a heavy machine gun but are hammered by a Hind. Logan takes control of the A-10 drones and uses them to take out the Hind and later another one. Enemy mortars cause their position to collapse. Logan and Hesh move through the trenches in the beach, gunning down every enemy in the path with both their own weapons and the A-10 drones. As they approach drone control, a Hind blocks their path. As Logan uses the A-10 drones to take it out, a MiG-29 fires a missile on drone control, severely damaging its tower. Hesh and Logan move in and evacuate who they can, but are attacked with mortars. With drone control offline, Command orders all US forces to retreat from the beach since the Federation invaded it. The two then regroup with Riley and look inside the heavily damaged command center for their father. Hesh and Riley get blocked in and find another way in. Logan searches for Elias but is ambushed by a Federation soldier with a knife. Riley tries to stop him but fails. The soldier manages to stab Logan in the chest, but is immediately killed by Hesh. The roof caves in and Hesh, Logan, and Riley are rescued by Keegan and another Ghost. Hesh wants to go back to rescue his father but Merrick shoves him back. The unknown Ghost reveals himself to be Elias Walker, much to Hesh's surprise. Merrick then tells them that Elias is the Ghosts' commanding officer. Elias then welcomes them into the Ghosts, and the brothers officially earn their place among the group. He then explains that Rorke was one of the Ghosts. 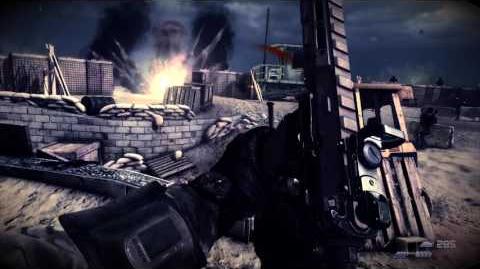 Call of Duty Ghosts Walkthrough - Homecoming (Part 5)
Homecoming
Add a photo to this gallery
Retrieved from "https://callofduty.fandom.com/wiki/Homecoming_(Ghosts)?oldid=2523108"
Community content is available under CC-BY-SA unless otherwise noted.