For other uses, see Hostage.

The Corridor of Death

Hostage! is the eleventh mission in Call of Duty 3 in which the player travels to several houses located in the French countryside. The main goal is to save Major Ingram from the Germans and later to save several French resistance fighters from their German captors. This is the longest Call of Duty 3 level.

The player will begin to man an MG in a Jeep (Vera) and a British soldier will drive. Later a Nazi ambush will occur, killing the driver with a surprise attack. The player will have to fight his/her way to save Ingram. After saving Ingram the player must drive with Marcel and Corporal Keith to find three other Hostages. After finding the three hostages the player must assist Ingram, Pierre and Isabelle in the courtyard. Isabelle plants a charge while the player covers her out in the open. After Isabelle plants the charge it goes off early, killing her. Go back to the others and fight off the rest of the Germans. The clip plays with Marcel and the others running over to Isabelle. Marcel picks her up and starts yelling "NO!". Keith comes over to him and shows that he was sorry for the loss of Isabelle. This is the last level the player plays as James Doyle.

In order to get to Ingram, follow Cpl. Keith's advice. The star on the compass shows the direction where to go. The player will face some random Germans along the way, and can drive over them and letting the allies shoot them. Leaving the enemies alone does not have an effect on the gameplay on this level, they're there just to keep the player busy. After the drive, Isabelle and Pierre are by a German Kupelwagen. After the small talk, Marcel, Keith and the player will assault the house. Four Germans will come from behind the truck by the house. Usually, three of them will run to the right, towards the tree & the other truck. The fourth German will take cover behind the crates. There are two more behind the hen house to the left. There are also two Germans by the windows on the second floor, an MG42 gunner by the window to the right and a rifleman to the left, take them out. Now, the house. A German will open a window, allowing the player to lob a grenade in the living room. There are two Germans in the living room and two more in the kitchen. The player could also lob a grenade in the kitchen. Go upstairs. The player will be shot at by a German from above, take him out quickly. There are two Germans in the room with the MG42, to the left. There is one more in the room to the right, and one in the room in front. One German will usually try to shoot the player by coming out from the room. Again, throwing grenades and using the shotgun is vital. Once having cleared the house, Keith will curse and he says the Major might be in the cellar. A couple of Germans (usually 6 of them) will open the cellar doors and assault the house. Use the MG42 here, but be sure to aim at the door in time, because the Germans will move up to the left. The player will only have a visual at the door and the courtyard. Go inside the cellar. There will be a lot of wine barrels and Germans behind them. Grenades are a big help here, because it's hard to shoot the Germans behind the barrels. Keep on moving and make sure to pick up more grenades from the Germans. There are three rooms in the cellar. After having taken out the Germans, Ingram's voice is heard. He is being interrogated. The player will open the door and Keith will shoot the interrogating German. Keith will untie Ingram while Marcel is clearing the way for the trio. Ingram says that the Jerries are holding three Maquis fighters captive around the village, and it's the player's job to save 'em. The player will move out with Marcel and Keith again.

Another objective star is on the compass. This star shows the locations of the house where a Maquis fighters is being held in. Drive there. The player will again be engaged by random Germans, taking them out is completely optional. The player will arrive at a house with a German Kupelwagen and a tractor outside. The Kupelwagen has an operational machine gun and a German will man it. Eliminate this threat. A German will be by the second floor window, take him out. There are four Germans behind the house, one to the right and three more near the Kupelwagen. The player could just go inside as soon as he/she arrives at the house, leaving the allies fighting with the enemies outside. There is a German to the left inside the kitchen and there are three other Germans in the living room to the right. Take them all out and go upstairs. There are four enemies upstairs, one will see two of them run to the left while the player is still by the stairs. There's a German in the room to the right and two in the room to the left. One German stays near the stairs. Find the first Maquis fighter and get to the next house. If the player fails to do this, it will cause a glitch to occur. After having saved the Maquis, the player's squad should get in the jeep.

Parking the car right next to a wall will cause someone, either the player or Marcel (depends on which side is blocked by the wall), won't be able to get in the jeep. After the player arrives at the house, a garage and the house is seen. Clear the garage out of enemies. There are four Germans inside the garage, take them out. Now, it's the player's choice to clear the garage or the house first, there are only four enemies in the garage. There are four Germans on the second floor and six Germans on the first floor. There's a German by the second floor window. Take him out. There are two Germans right to the left inside the storage room. The storage room leads straight to the kitchen, and there's a German there. There are two more in the living room and the sixth one will come downstairs. Take them all out. Go upstairs and eliminate any threat. There are three Germans to the right, in the room with the open window. There's another German to the left. Maquis fighter #2 rescued. Make way to the third area. This time, it's a big open area with a farm house. There are four Germans by the farm house, take them out. Usually two of them run to the truck and the other two will stay at the farmhouse. There's a German Kupelwagen on the courtyard, take the gunner out. Now, there are six Germans inside the first floor of the house. Two Germans will open the windows, one on the second floor and one on the first floor. Take them both out. Throw a grenade in the house, this usually takes out two or three enemies. There's one inside the garage, three in the hall, one in the living room, and one by the window. Now, this is completely optional. Doing this, the player will face more enemies than normal. The player can clear out the backyard of the house. This will trigger more Germans to spawn behind the henhouse. This always happens if one decides to enter the house from the back. The player will see four Germans, two will stay by the hen house and the other two will move up a bit. Take them all out. Now, the second floor. There are only three Germans in there. Two, if the player took out the enemy by the window. One will move towards the player, and the last one (or ones) will be in the room in front. Maquis fighter #3 rescued.

The final firefight of the British campaign. The player will arrive back to the intersection from the start. Ingram, Pierre and Isabelle are pinned down. Now, all the player needs to do here is to sit back and slaughter the attacking enemies. The player will also get two Maquis fighters to assist, although they can die. Two more will always come in, so they're just random characters. After some fighting, a German armored car comes in. Ingram orders the player to flank the 'beast' with Isabelle. Taking the right path is recommended, as the player only has to kill the German by the second floor window and two others near the statue. Some more will spawn by the barbwire to the right, take them out before they have a chance to do anything. Isabelle will then plant a bomb on the armored car. The armored car explodes instantly, killing Isabelle. Go back to the squad. Hold off the Germans a little longer. Artillery fire is hitting the square, leaving the Germans confused. A few German trucks and Kupelwagens explode and even more Germans get taken out by the shells and some Germans retreat, leaving the player with a victory. Marcel yells "Isabelle! No!" and holds Isabelle in his arms. Keith comforts Marcel and says "I'm sorry Marcel." "She was a brave lass." "Brave as any of you Maquis." Apparently, Marcel and Keith are now friends. 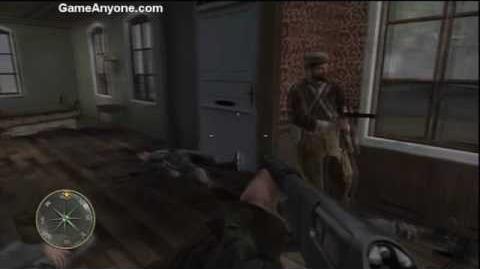 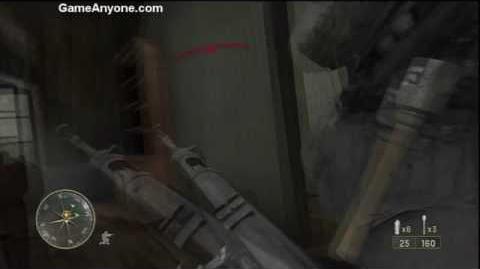 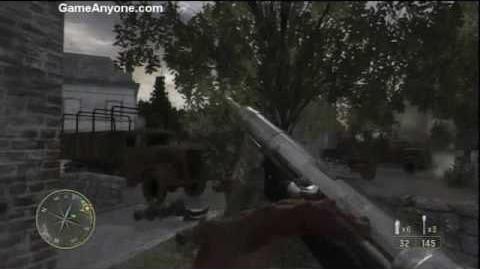