Hostiles is a survival mode in Call of Duty: Black Ops Declassified.

Hostiles involves surviving endless waves of enemies. There is a delay between waves that generally lasts for around fifteen seconds, which is also present at the very start of the match. The player will receive Care Package drops between waves, which can contain ammunition, weapons, or a Killstreak in the form of a Mortar Strike or a Sentry Gun; however, the player must take the care package before the round ends or it will disappear, even if it the player is in the process of taking it. The player always starts with a different semi-automatic pistol depending on the map and has limited equipment in the form of two to four M67s or four to five Semtexes, and two to five Flash Bang Grenades. The pistol will either have a Tactical attachment and one spare magazine, or no attachments and two spare magazines. The game ends when the player is killed, or if the player chooses to quit.

The final score is determined based upon accuracy, amount of kills, and the difficulty setting (which automatically increases with consecutive waves). The player can receive up to three stars on their mission, but every later mission will require more kills to get stars. One star is rewarded if the player reaches the first kill goal, two stars for the second kill goal, and three stars for the third kill goal.

Playing Hostiles can, and will, add Campaign XP for every match played.[1]

All of the dropped weapons from enemies can be picked up, but they will almost always have no reserve ammo and a partially filled magazine, in which case the player must use an ammo crate or pick up the ammo of weapons that other enemies have used in order to fill up the weapon's magazine.

Similar to flipping the map in Call of Duty: Advanced Warfare's Exo Survival mode, after every thirteen rounds, the enemies will start carrying shotguns again, then move on to the other weapons they previously carried. The weapons they drop after this happens will give the player much less ammo (generally only one to six bullets), making the player have to rely more on ammo care packages and weapon care packages.

Enemy health varies depending on the wave. It is pretty much the same throughout the waves, or unnoticably different for the first waves, but in the tens of waves on certain maps it changes so it takes at least two knife hits to kill enemies.

All of the maps are basically renamed multiplayer maps. 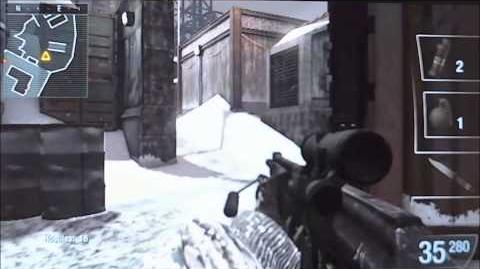 Gameplay in Hostiles mode.
Add a photo to this gallery

Retrieved from "https://callofduty.fandom.com/wiki/Hostiles?oldid=2474945"
Community content is available under CC-BY-SA unless otherwise noted.