Survive for as long as possible against limitless waves of Zombies.

"A rural house is your last hope for survival as the zombies advance."
— Description

In the first room, the M14 can be found for 1800 points and the M1891/59 for 300 points, but it is recommended that the player use the Throwing Knife because zombies in the first rounds are still weak. There is a door that can be opened for 5000 points that leads to the second room. There are a total of five windows in this room and each one with a barricade.

There is a glitch to where only Zombies can spawn in only two barricades around the "Aim for the head" area. Though at high rounds it is hard to control them both.

In this room the player can find the PPSh-41 for 5000 points and a M16A1 with a Grenade Launcher is also available for 7500 points, as well as an XM22 and a M79. Grenades are also available for purchase. There is also a hole in the floor in between the walls with the PPSh-41 and XM22 which the player can shoot through, which can be useful for safely clearing out the starting room. 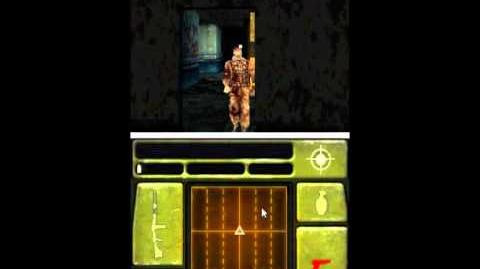